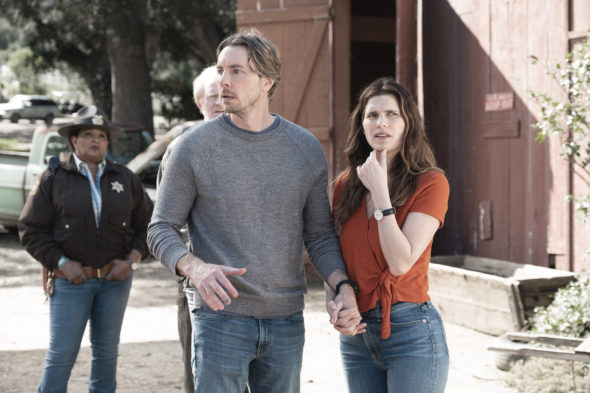 Will you miss Bless This Mess? The cast and creators of the ABC TV show have posted their reactions to the series’ cancellation.

The sitcom series follows young newlyweds Mike and Rio Levine-Young (Dax Shepard and Lake Bell) who give up their lives in New York City to run a farm in Nebraska that Mike’s great-aunt left to him. The cast also includes Ed Begley Jr., Pam Grier, JT Neal, David Koechner, and Madison Curry.

As reported earlier, ABC has cancelled Bless This Mess after two seasons. Creators Liz Meriwether and Lake Bell posted their goodbyes to the series on social media alongside farewell messages from cast members Dax Shepard and JT Neal:

I got pooped on by 7 different species of animals, got stabbed by Jim O’Hare while dressed like a buck, smushed my face in @daxshepard buttcheeks while he ran around sweating, got catapulted into a freezing pond with non-potable water & I’d do it all again. ❤️ @lizmeriwether pic.twitter.com/QR5urfjt5h

I'm trying to focus on the positives: they chose a satisfactory pic of me for this announcement 🙂 https://t.co/FkCmaLkvX8

What do you think? Did you watch Bless This Mess? Would you have watched a third season?

I actually really liked this show and wish it could get picked up by another network. Especially after the season 2 finale it kept me hooked.

We watch several other tv series but Bless This Mess was the one show that made us belly laugh each week and we scheduled time for it. The cast was amazing, the story line was great and I just don’t understand. I guess it didn’t have enough violence and hatred on it. It was lighthearted, what viewers need these days. I had a lot of my friends and family watching it. I’m actually quite sad about this and wish the network would reconsider!!!