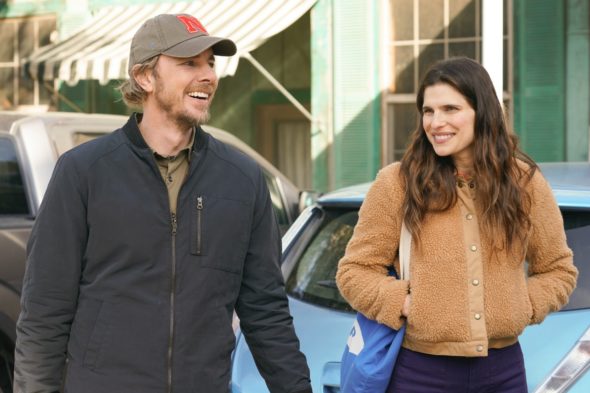 This news sounds more like a curse than a blessing. ABC has revealed that they’ve cancelled Bless This Mess so, it won’t be back for the 2020-21 season.

The Bless This Mess comedy series follows young newlyweds Mike and Rio Levine-Young (Dax Shepard and Lake Bell) who give up their lives in New York City to run a farm in Nebraska that Mike’s great-aunt left to him. The cast also includes Ed Begley Jr., Pam Grier, JT Neal, David Koechner, and Madison Curry.

The second season of Bless This Mess averaged a 0.67 rating in the 18-49 demographic and 3.64 million viewers. Compared to season one, that’s even in the demo and up by 9% in overall viewers.

Despite Bless This Mess being one of ABC‘s few TV shows to actually gain viewers in its sophomore season, the network has still decided not to order a third season. Compared to the network’s other scripted series, Bless This Mess was a middle-of-the-road performer.

Both Single Parents and Bless This Mess are produced by 20th Century Fox Television (now owned by ABC parent company, Disney) and executive produced by Liz Meriwether (New Girl). Neither series was picked up for 2020-21 by ABC.

What do you think? Do you watch Bless This Mess TV series? Would you have watched season three on ABC?

Bring it back Please! Our favorite new comedy!

I can’t believe that this show was canceled. My husband and I love this show. Please consider bringing it back.

Please bring this back!!! It is my favourite show!! I need it to come back before I need to live through them!!!

I WOULD OF DEFINITELY WATCHED ANOTHER SEASON!! IT WAS GREAT, it’s all star cast was absolutely hilarious and I’m VERY disappointed that it was canceled.

We love Bless This Mess. The cast was awesome. Their chemistry was great. Sad we won’t see more.

That sucks! I LOVED this show!

What a shame! This show and cast was the absolute greatest! So very funny!

I’m really sad there is no season 3, really enjoyed the show, the comedy, the cast

I loved this show, just rewatching on HULU I so wish there was a season 3. PLEASE BRING BACK

We really enjoyed this show, sorry it won’t be back

I agree please bring bless this mess back ….it’s just a plain funny show and the whole cast really fit !!

Ugh. How could they cancel this show?? It was hilarious! ABC- change your mind!!!!!