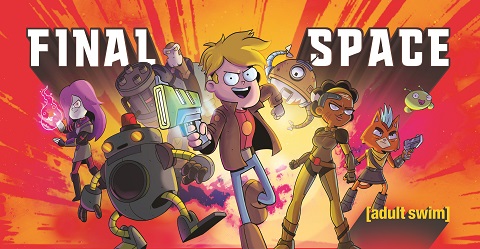 “No one will survive.” Adult Swim just announced the premiere date for season two of Final Space.

The animated sci-fi series centers on Gary (Olan Rogers), a former prisoner who meets a little green alien that turns out to be the most powerful weapon in the universe. The voice cast also includes David Tennant, Keith David, Conan O’Brien, Steven Yeun, and Tika Sumpter.

The second season of the epic sci-fi adventure comedy with a plethora of heart, Final Space, will premiere on Monday, June 24th at 11:30 p.m. ET/PT on Adult Swim.

In its first season as a TBS original series, Final Space found a huge audience of new fans during replays on Adult Swim, the #1 destination for young adults. On average, the weekly replays regularly won the timeslot. To shake things up, new episodes will now premiere on Adult Swim before encoring the following week on TBS.

Buckle up your butt cheeks – it’s about to get wild. Season two of Final Spacefinds Gary restarting with a new ship and a new AI voiced by Jane Lynch (Glee) as they recover what’s left of his crew. Conan O’Brien reprises his role as Clarence, now a series regular, alongside Ron Funches (Undatable) and Ashly Burch (Attack on Titan) as they embark on an epic mission to free the Titan Bolo (Keith David). Along the way, Gary battles new villains led by Alan Tudyk (Firefly), Christopher Judge (Stargate SG-1) and Gary’s Mom, Claudia Black (Farscape).

What do you think? Have you seen Final Space? Will you watch the new season?

Wonderful can’t wait to see it

Adult Swim, instead of TBS? I’ll have to remember to change my dvr settings, so that i don’t miss it.