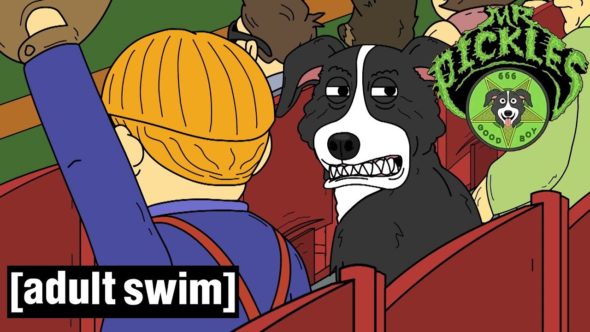 Mr. Pickles is returning to Adult Swim with an all-new season soon. A premiere date has now been set for season four of the animated series. The story for the new season picks up where season three ended.

Mr. Pickles will premiere season four on November 17 at midnight ET/PT. Adult Swim revealed more about the return of the series in a press release.

“Mr. Pickles, Old Town’s cutest dog is back for a fourth season of tail wagging, flesh ripping and head decapitating – good old classic American adventure, beginning Sunday, November 17th at Midnight ET/PT on Adult Swim. After Mr. Pickles framed Grandpa for murder in the Season 3 finale, Sheriff learns of Grandpa’s whereabouts, and heads out of the country to track him down. Meanwhile Grandpa has a new determination to finally end things with Mr. Pickles, once and for all.

Set in the small, old-fashioned world of Old Town, Mr. Pickles centers on the lives of the Goodman family and their innocent six-year-old son Tommy, whose best friend is the family’s lovable and sometimes naughty, Border Collie, Mr. Pickles. Mr. Pickles is a HotHouse production created by Will Carsola and Dave Stewart. It is executive produced by Carsola, Stewart, Michael J. Rizzo, and Mike Mayfield.”

What do you think? Are you a fan of this Adult Swim series? Will you check out the fourth season of Mr. Pickles?

What’s going on with Mr Pickles, if you don’t bring it back I’m gonna have to go back to drugs.
Mr. Pickles is the only thing keeping me sober

So they aired this one episode then nothing? When is the rest of season 4 coming? Or did I somehow miss it. I really hope not because none of it is available to stream anywhere…not even on the AS channel on my Roku.

I would very much like if you continue Mr. Pickles. Please!!!

I love mr. Pickels the show sucks without him PLEASE BRING HIM BACK!!

I love mr pickles. I want mr. Pickles. Is the puppy gonna grow up to come back as mr pickles or revenge mr pickles. Its ok to get to know the other side of the other towns people but ive not even seen tommy. New versions are good but we want mr pickles. Looking forward to forward to next season already!

Is Mr Pickles really dead? I like the new incarnation of the show but it sucks without the old format. Bring back Mr. Pickles!

I love Mr. Pickles. It’s dark and twisted. However, Mr. Pickles is also a good boy because he always protects his boy, Tommy from people and creatures that want to hurt him. I wish he could settle his beef with Grandpa. They would make a hell of a team.