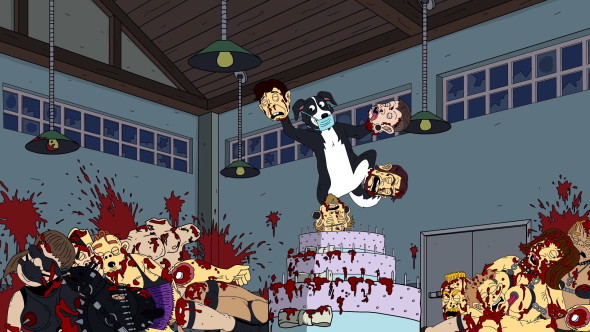 Mr. Pickles fans are in for some good news. Today, Adult Swim announced season three will debut in February.

The animated series centers on the Goodman family and the adventures of their evil dog, Mr. Pickles. The voice cast includes Kaitlyn Robrock, Brooke Shields, Jay Johnston, and Frank Collision.

Season three of Mr. Pickles follows the Goodman family, and the eccentric residents of Old Town, in their most off-the-wall escapades yet! Join Mr. Goodman and Mrs. Goodman in battling bullies, zombies and telemarketing plantation owners. Go on a ride along with Sheriff in the hit reality show “Sheriffs”, and learn from Tommy what it really takes to make a hit cartoon show. Don’t forget about the about the wonderful Mr. Pickles, who is never too far away from the action. This season he faces off against some of his toughest foes including memory hackers, ruthless television executives, and military footwear. Mr. Pickles is a HotHouse production created by Will Carsola and Dave Stewart. It is executive produced by Carsola, Stewart, Michael J. Rizzo, and Mike Mayfield.

The original architects of the thrash metal scene, Exodus has battled every kind of adversity over the past 30 years and used it all as fuel to stoke their ever-raging fire. Short-lived trends, line-up shifts and label conflicts couldn’t stop the beast. Exodus includes Steve “Zetro” Souza (vocals), Gary Holt (guitar), Lee Altus (guitar), Jack Gibson (bass) and Tom Hunting (drums). With “Blood In Blood Out”, Exodus’ tenth full-length studio album of new material, Holt, Hunting, Gibson, Altus, and Souza prove they still has the fortitude, chops, and talent to deliver top-notch, ballad-free tunes that stand out without straying from their band’s core aesthetic.

Equipped with crushing sound that will implode both your soul and skull, speed metal masters Municipal Waste features Tony Foresta (vocals), Ryan Waste (guitars, backing vocals), Nick Poulous (guitars), Phil “LandPhil” Hall (bass, backing vocals) and Dave Witte (drums). Starting out playing their first live show on New Year’s Eve of 2000, Municipal Waste released their debut self-titled EP and followed up shortly with their first full length record entitled “Waste Em’ All” in 2003. It wasn’t long before they caught the attention of Earache Records and went on to release three more albums upon said label. In 2005 came “Hazardous Mutation” followed by “The Art Of Partying” in 2007, and then “Massive Aggressive” in 2009. In 2011 they caught the solid attention of Nuclear Blast Records and signed to the label, eventually releasing Fatal Feast in 2012.

Catch up on previous seasons of Mr. Pickles on AdultSwim.com.”

What do you think? Are you a fan of Mr. Pickles? Are you excited for the new season?

Hopefully there’s no fourth season. It is just DISGUSTING.

That’s the whole point of the show. I’m hoping for another season.