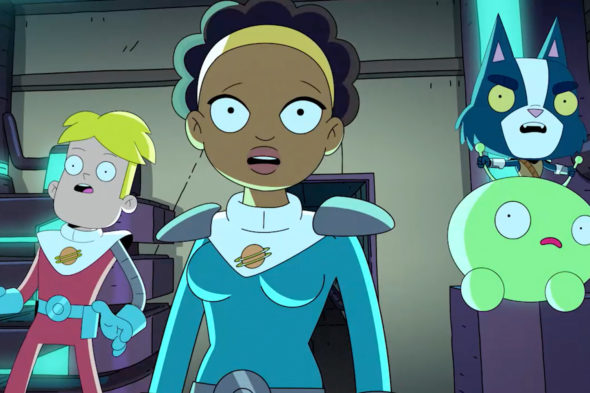 What’s your verdict on the first season of the Final Space TV show on TBS? As we all know, the Nielsen ratings typically play a big role in determining whether a TV show like Final Space is cancelled or renewed for season two. Unfortunately, most of us do not live in Nielsen households. Because many viewers feel frustration when their viewing habits and opinions aren’t considered, we’d like to offer you the chance to rate all of the Final Space season one episodes here.

A TBS animated comedy, Final Space stars creator Olan Rogers, Fred Armisen, Tom Kenny, David Tennant, Tika Sumpter, Steven Yeun, and Coty Galloway. The serial sci-fi sitcom centers on Gary (Rogers), who has been serving out a prison sentence on the Galaxy One, for the past five years. While working off his crimes, Gary meets a green alien, Mooncake (also voiced by Rogers). What Gary doesn’t realize is that his cute little buddy is a planet destroyer, and the evil Lord Commander (Tennant) is hot on his trail.

What do you think? Which season one episodes of the Final Space TV series do you rate as wonderful, terrible, or somewhere between? Should TBS cancel or renew Final Space for a second season? Don’t forget to vote, and share your thoughts, below.

I love this show! If I weren’t always on the road I’d watch it again! Got my fiancee to watch, and she prefers live action! But the further into the show she got the more she loved it and added it to her regular shows. This show has definitely done something right to get someone with her preferences to watch.

Never before have I connected with the characters of an animated show like I have with Final Space. I actually care about these guys!

I loved it! Caught my attention, one great story. Nothing i seen before. I’m hopeful there will be more seasons.

Needs to be rewnewed please

PLEASE SEASON 2!…LOOOOOOVE THIS SHOW! Characters are so lovable and like a heart catching dysfunctional family..lol got to see what happens next!Olan Rogers Rocks It…googled season 2 directly after finale was over❤

OMG! OMG! OMG! PLEEEEEASE TELL ME THERE WILL BE A SEASON 2!

I’m a very picky person with my shows and I like a lot and love very few. This series has captured my heart and I hope Olan gets to explore the further plots in his head.

first of all, I loved the series. but the season finale is one i can’t let stand. as soon as i saw the end I googled “season 2” and came here. if it ends like this i doubt many fans will be satisfied. we need a second season.

Liked episodes 1-9… just watched episode 10. Worst season finale EVER. Nothing resolved. Everyone dead. Earth gone. It’s like going to a star wars movie where they fail to blow up the death star and Luke/Leia/r2d2/c3po/chewy/han all die.

I can understand what you mean. But the show is about time travel. Theyll all come back

“Worst season finale EVER”!?!?.Man,this aint like your fantasy world where everyone comes out of it alive.Its the sad truth.The plan always go sideways and what Final Space had shown in episode 10 was truly awestrucking.A beautiful masterpiece left with a cliffhanger.Cant wait for season 2!!!

Ha! It’s only like that if you only went to watch episode 4 of Star Wars and never went back for the next 9 films!! This comment is not very thought through if we are trying to get a season 2! Which we all should be hoping for!!!

Its called a cliffhanger

God, I hope this gets renewed for a second season! It ended on such a huge cliffhanger!

I agree, this show was a wonderful story line going into depth of every character. I for one love the show and pray that they renew for a second season. I would watch any spinoff or other series that Oman would create.

I’m with Bill, best show out there right now.. We all need some more mooncake in our lives!

Surpasses all animated series to date . I love the story line and Gary is and evolving hot mess . I truely hope this show continues on for many years. I for one will follow every show . Love the twists . Keep em coming guys

I LOVE “Final Space”. It’s such a smart and unusual series, especially for something animated. The characters and the story are unique and there’s a lot of humour added to the drama and adventure.
Olan Rogers is a superb storyteller. The plot, writing and vocal cast are all top notch. I’m looking forward to seeing many more seasons of “Final Space”.

I’m definitely enjoying this cartoon so far. It had better get renewed, as we all need more Mooncake, in our lives.