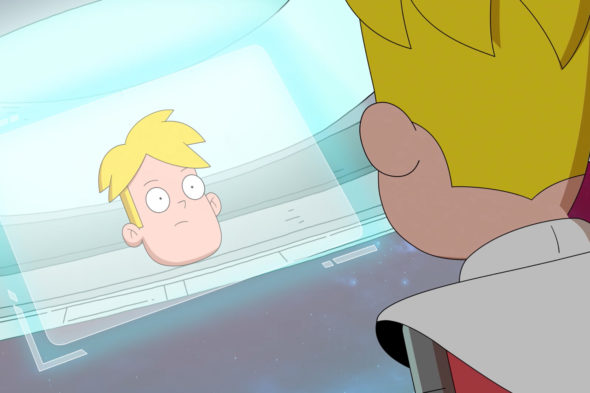 How long can Gary keep Mooncake safe from the nefarious Lord Commander? Has the Final Space TV show been cancelled or renewed for a second season on TBS? The television vulture is watching all the latest cancellation and renewal news, so this page is the place to track the status of Final Space, season two. Bookmark it, or subscribe for the latest updates. Remember, the television vulture is watching your shows. Are you?

A TBS animated comedy, Final Space stars creator Olan Rogers, Fred Armisen, Tom Kenny, David Tennant, Tika Sumpter, Steven Yeun, and Coty Galloway. The serial sci-fi sitcom centers on Gary (Rogers), who has been serving out a prison sentence on the Galaxy One, for the past five years. While working off his crimes, Gary meets a green alien, Mooncake (also voiced by Rogers). What Gary doesn’t realize is that his cute little buddy is a planet destroyer, and the evil Lord Commander (Tennant) is hot on his trail.

The first season of Final Space averaged a 0.23 rating in the 18-49 demographic and 458,000 viewers. Learn how Final Space stacks up against other TBS TV shows.

Will TBS cancel or renew Final Space for season two? The ratings haven’t been very good but I suspect they are good enough to land this newbie series a second season renewal. Since that’s simply speculation, I’ll keep an eye on the Nielsens and update this page with breaking developments. Subscribe for free updates on any Final Space cancellation or renewal news.

5/7/2018 status update: Final Space has been renewed for season two on TBS. Get the details and watch a documentary short, here.

What do you think? Did you think the Final Space TV show would be renewed for a second season? How would you feel if TBS had cancelled this TV show, instead?

This show is WAY too good to be on TBS where it goes virtually unseen by it’s potential rabid fan base. Netflix should grab this show and it’s creative team. Thrilled to see talent and balls taking a 1st season in this direction + really nice to see some depth in the animation.

Season 2, please Quinn, Gary and Mooncake need to be reunited. Quinn and Gary need to evolve their relationship, and I need to hear Mooncake’s happy cookit again. Season 2 please

Please bring season 2 to us, we need it!

Just finished the season finale, and if this doesn’t get a second season a piece of my soul will die.

OH MY HOLY CRAP! that season finale was AWESOME! so refreshing to not have the happy little cookie cutter ending where all is good with the world. When Kevin dies….such a strange mix of satisfied mixed with sad! Soooo gooood. However if there’s not going to be a season 2…..im gonna foam at the mouth from anger. I have to know WTF happens and who is saving “the Gary!” at the end of the episode. Is it Tribores little floozy and rescued lil cado? could it be future Quinn?….it Could be, who knooows! It probably issssss. I literally love this… Read more »

Awesome show with an excellent twistvand turn. Woul like to see what happens to Gary and how he gets everyone back together