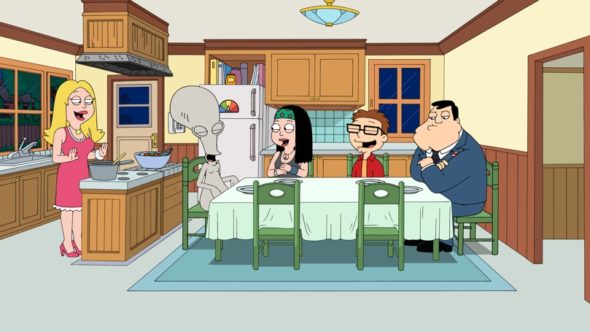 Are Stan Smith and the family sticking around? Has the American Dad! TV show been cancelled or renewed for a 14th season on TBS? The television vulture is watching all the latest cancellation and renewal news, so this page is the place to track the status of American Dad!, season 14. Bookmark it, or subscribe for the latest updates. Remember, the television vulture is watching your shows. Are you?

There’s no need to worry that American Dad! will be cancelled too soon, as it is already renewed through the 15th season. Even though I’m making other dinner plans, I will still keep an eye on the ratings and update this page with breaking developments. Subscribe for free American Dad! cancellation or renewal alerts.

What do you think? Did you expect American Dad! TV show to be renewed for seasons 14 and 15? How would you feel if TBS had cancelled this TV show, instead?