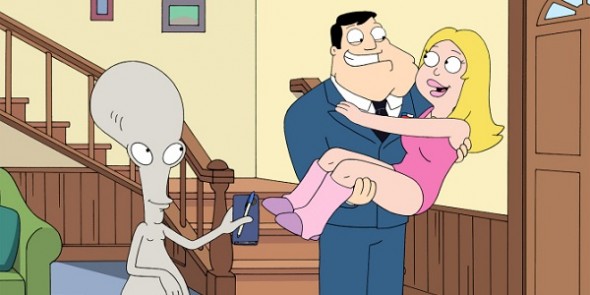 TBS has renewed animated sitcom American Dad! for two more seasons of 22 episodes apiece. This renewal will keep the series on the air through 2018.

Animated Hit Ranks #1 in Its TBS Timeslot, with Encores Airing on Adult Swim

TBS is doubling down on American Dad!, ordering two more seasons of the top-rated animated hit from Twentieth Century Fox Television, ensuring that the Stan Smith clan will have a home on the network through 2018. An important programming initiative for the Turner portfolio, American Dad! also has a second home on TBS’s sister network, Adult Swim, which presents an encore of each new episode after its TBS premiere. Today’s announcement adds 44 episodes to the series – 22 each for seasons 12 & 13. It marks the second time in less than year that TBS has renewed the series. In November, the network announced a 22-episode order for season 11, which is set to air on TBS and Adult Swim in early 2016.

Created by Seth MacFarlane, Mike Barker and Matt Weitzman, American Dad! joined the TBS slate in October 2014 with the start of the show’s 10th season. Since then, it has ranked as basic cable’s #1 scripted series in the Monday 9 p.m. timeslot with adults 18-34 and #2 in the timeslot with adults 18-49. Overall, American Dad! reaches an average of nearly 4 million viewers per episode through its telecasts on TBS and Adult Swim, as well as through TBS’s on-demand, digital and mobile platforms.

“American Dad! has thrived since coming to TBS and Adult Swim, demonstrating the Turner portfolio’s ability to build enduring hits through a combination of smart programming, savvy promotion and extensive multiplatform distribution,” said Deborah Bradley, executive vice president of networks optimization and content commercialization for Turner Broadcasting. “We look forward to keeping the crazy-but-lovable Smith family around for a long time.”

TBS’s double renewal of American Dad! is part of an overall strategy to update the network’s brand and expand its lineup of original programming. Kevin Reilly, president of TBS and TNT and chief creative officer for Turner Entertainment, announced the brand overhaul during the TBS portion of Turner’s Upfront presentation in May. Initial plans call for TBS to grow its original programming slate to more than 15 series over the next two years, with a focus on original live-action and animated comedies that are, in Reilly’s words, “awesomely in-your-face.” The rebrand is set to begin in the fourth quarter, in conjunction with the season 12 premiere of American Dad! and the launches of the brand new TBS comedies Angie Tribeca and The Detour.

American Dad!American Dad! is an irreverent, satirical, award-winning animated comedy that sprang from the minds of creators Seth MacFarlane, Mike Barker and Matt Weitzman. The series centers on super patriotic CIA agent Stan Smith (voiced by Seth MacFarlane) and the misadventures of his unconventional family in Langley Falls, Va. Stan’s blissfully unaware wife, Francine (Wendy Schaal), has an unfaltering loyalty that allows her to turn a blind eye toward Stan’s unabashed arrogance. Meanwhile, Stan constantly butts heads with his 18-year-old left-wing activist daughter, Hayley (Rachael MacFarlane), who knows just how to push her father’s buttons, whether it’s by helpi ng the homeless, demanding women’s rights, or advocating gun control. Hayley’s 14-year-old brother is the geeky-yet-confident Steve (Scott Grimes), a kid who spends his time playing video games and obsessing about the opposite sex.

The Smith cabinet is rounded out by two rather unconventional members: Roger (MacFarlane), the sassy, sarcastic and routinely inappropriate space alien who is constantly trying on new disguises and, with them, new personalities, and Klaus (Dee Bradley Baker), the attention-starved goldfish with the brain of a German Olympic skier who always throws in his two cents, regardless of whether anyone is listening. Together, this screwball family of radically different personalities is just trying to figure out how to love and trust one another in a bi-partisan world. And with a guy like Stan in charge of national security, it’s guaranteed to be one hilarious ride.

A 21st Century Fox company, Twentieth Century Fox Television is one of the industry’s most prolific suppliers of primetime television programming and entertainment content, including the blockbuster and Emmy®- and Golden Globe®-winning Modern Family; the Emmy- and Golden Globe-winning dramatic series Homeland; the celebrated anthology series American Horror Story; and the longest running primetime scripted series in the history of television, The Simpsons.

TBS is basic cable’s #1 entertainment network among young adults in primetime. Available in 96 million households, TBS features such original comedies as American Dad!, Clipped and the upcoming Angie Tribeca, The Detour and Wrecked, along with unscripted originals like Funny Or Die Presents America’s Next Weatherman, Meet the Smiths and the upcoming Separation Anxiety. In late night TBS is home to the Emmy®-winning series CONAN, starring Conan O’Brien. The TBS lineup also includes the popular contemporary comedies The Big Bang Theory and Family Guy; blockbuster movies; and championship sports coverage of Major League Baseball’s regular and post-season play and the NCAA Division I Men’s Basketball Championship.

TBS is part of Turner Broadcasting System, Inc., a Time Warner company. Turner Broadcasting creates and programs branded news; entertainment; kids and young adult; and sports media environments on television and other platforms for consumers around the world.

Adult Swim is part of Turner Broadcasting System, Inc., a Time Warner company. Turner Broadcasting creates and programs branded news; entertainment; kids and young adult; and sports media environments on television and other platforms for consumers around the world.

What do you think? Do you like the American Dad! animated series? How long do you think it should continue?

I love this show ever since it came on the air! My favorite animated show! I’m happy to hear 2 more seasons of new shows. Look forward to many new shows, thank you TBS!