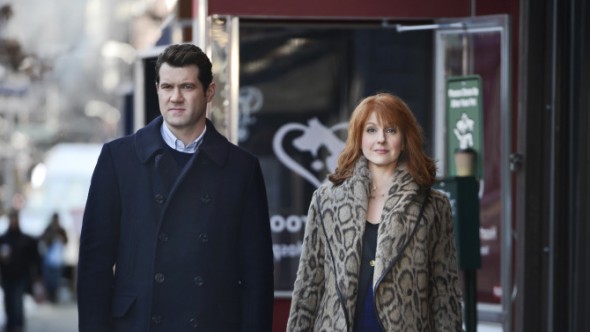 Hulu has ordered a second season of Difficult People, their original comedy series that stars Julie Klausner and Billy Eichner. There will be 10 episodes once again.

“We have been big fans of Difficult People from day one and are so happy to have Julie and Billy be part of the Hulu family. I cannot wait to see what a whole new season will bring and am pleased to bring more of their hilarious brand of comedy to fans,” said Craig Erwich, SVP, Head of Content, Hulu.

“From our first meeting with Julie, Billy and Amy, to the spec pilot we shot with them, to Hulu’s spectacular and ongoing commitment, this has been a dream of a show. And I’m not just saying that because I’m afraid of them,” said Jeff Wachtel, President, Universal Cable Productions and Chief Content Officer, NBCUniversal Cable Entertainment.

Difficult People hails from Julie Klausner (Billy on the Street) who stars alongside Emmy®-nominated Billy on the Street host Billy Eichner. As best friends living in New York City, their typical, irreverent behavior lands them in some very awkward situations. Klausner and King wrote all episodes of season one and will continue to serve as executive producers for the series.

“I’m the luckiest girl in the world to be able to make more episodes of Difficult People,” said Klausner. “This must be what it feels like to win the lottery, have a fast metabolism or win an Oscar for My Cousin Vinny.”

The second season of Difficult People comes to Hulu in collaboration with Universal Cable Productions. Amy Poehler’s Paper Kite Productions in conjunction with Dave Becky’s 3 Arts Entertainment and Jax Media will continue to produce the series.

About Hulu
Hulu is a premium streaming TV destination that offers thousands of hours of the best of current season programming, premium original content and full seasons of hit series to subscribers across millions of internet-connected devices in the U.S. Hulu is the only streaming subscription service that offers current season content from 5 of the 6 largest U.S. broadcast networks. Since its launch in 2007, Hulu has been at the intersection of entertainment and technology and continues to redefine TV by connecting viewers with the stories they love.

What do you think? Do you like the Difficult People TV show on Hulu? Will you be watching season two?

Thanks for sharing! I love Hulu especially because I can watch the latest episodes 1 day after they air. If you live outside USA like me, you can use UnoTelly or other similar tools to access Hulu Plus overseas.