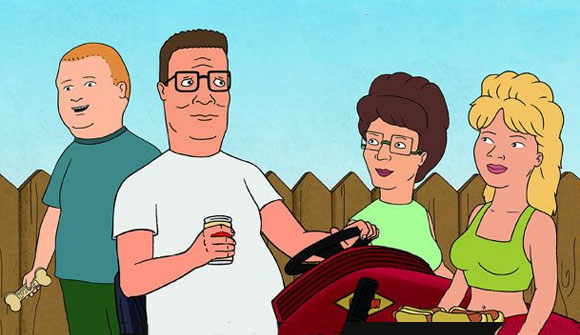 Some of your favorite cartoons are coming to Hulu. Today, the streaming service announced they’ve acquired the streaming rights to King of the Hill, Family Guy, American Dad!, and Futurama.

The new deal, which begins November 1st, includes all 13 season of King of the Hill, all seven seasons of Futurama, all 15 seasons of American Dad!, and all seasons of Family Guy (including the current, 16th season).

SANTA MONICA, CA (November 1, 2018) – Calling all fans of Hank, Peggy, Bobby and Luanne: Beginning today, Hulu is the exclusive streaming home to every episode of Emmy Award-winning animated series King of The Hill!

In a deal that further expands its licensing agreement with 20th Century Fox Television Distribution and cements Hulu as the leading destination for premium animated series, Hulu has added all 13 seasons of King of The Hill exclusively to its service. In addition, the company has locked in the exclusive post-broadcast streaming rights to Emmy-winning comedies Bob’s Burgers and Family Guy, as well as American Dad!, and all episodes of library series The Cleveland Show and Emmy-winning Futurama.

Over the past few years, Hulu has struck multiple licensing agreements to build out the best and most comprehensive collection of animated comedies available through a streaming service. Hulu offers thousands of episodes of premium animated content and is now the exclusive subscription streaming home to the largest offering of animated programming from 20th Century Fox Television, as well as hits from other content partners including South Park, Rick and Morty, Robot Chicken, Adventure Time and more.

Hulu is also the exclusive post-broadcast streaming home to a full suite of programming from Twentieth Century Fox Television Distribution series, including drama series The Orville, The Gifted, The Resident, as well as hits Empire, The Last Man on Earth, and more. “

What do you think? Are you a fan of these animated TV shows? Will you watch them on Hulu?

King of the Hill was the best show ever!!!! I want it to start coming on again…. Renewed and fresh episodes! I’m heartbroken it was cancelled! Shame on you Mike Judge!!! It was our FAVORITE show!