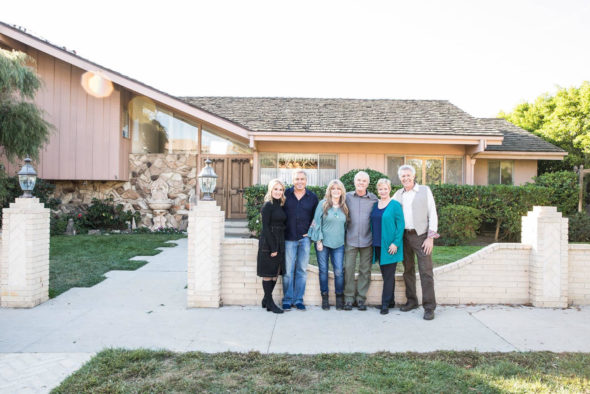 One of TV’s most famous families is back! HGTV just announced the cast of The Brady Bunch will reunite for their new TV show, A Very Brady Renovation (wt).

The new series will see a team of experts renovate the famous Brady Bunch house with a “a ‘70s-inspired rehab that’s sure to have everyone saying, “far out!” The show will feature the return of original cast members Barry Williams, Maureen McCormick, Christopher Knight, Eve Plump, Mike Lookinland, and Susan Olsen.

A Very Brady Renovation debuts on HGTV in September 2019.

New York [Nov. 1, 2018] It was a sunshine day at The Brady Bunch house in Los Angeles as six of the legendary sitcom’s original cast members came together for the first time in nearly 15 years to kick-off a full-scale overhaul of the world-famous home and begin production on HGTV’s newest renovation series, A Very Brady Renovation (w.t.). TV siblings Barry Williams (Greg), Maureen McCormick(Marcia), Christopher Knight (Peter), Eve Plumb (Jan), Mike Lookinland (Bobby) and Susan Olsen (Cindy) gathered with Jonathan and Drew Scott (Property Brothers), Mina Starsiak and Karen E Laine (Good Bones), siblings Leanne and Steve Ford (Restored by the Fords), Jasmine Roth (Hidden Potential) and Lara Spencer (Flea Market Flip) for an on-camera walk-through of the home. As one of the biggest programming events that HGTV has ever undertaken, the renovation of The Brady Bunch house will feature additional surprise celebrity guests. It is scheduled to premiere in September 2019.

Stirring up social media buzz from fans and A-listers alike, the upcoming series will showcase the famous house as it gets a ‘70s-inspired rehab that’s sure to have everyone saying, “far out!” The Brady Bunch, a popular family sitcom that ran for five seasons in the early 1970s, is widely recognized as a hallmark of American television. Its success led to multiple spin-off series, specials and feature films.

“What’s so exciting about this project is that we are creating one of the most iconic homes from many of our viewers’ childhoods,” said Loren Ruch, senior vice president, HGTV programming and partnerships. “It will be the first time in history that the house from all of our memories will be created in a real brick and mortar location. It is certain to be a trip down memory lane.”

HGTV also will capture all the behind-the-scenes magic on the first production day. Fun interviews with cast members, photos and a video of special moments will be available for fans on HGTV’s Facebook,Instagram and Twitter and on HGTV.com.

Exterior shots of the real house were often used to establish a sense of time and place for the Brady family. In the coming months, HGTV will execute a show-stopping transformation by adding 2,000 square feet to its original footprint—all without compromising its instantly recognizable street view. HGTV home renovation stars also will reimagine the popular show’s interior set design, working to ensure that the final renovation results stay true to the spirit of the Brady Bunch family home that everyone loves and remembers. From the unforgettable signature wood-paneled living room with floating staircase to the orange and green kitchen and the kids’ Jack-and-Jill bathroom, The Brady Bunch house will forever hold a special place in television history and American pop culture”

What do you think? Are you a fan of The Brady Bunch? Will you watch the new HGTV series?

Yes, will definitely be looking forward to this series. It’ll be interesting what they do the the Brady home. What happens to the house after the renovation is complete? Will this be the Annual give-a-way house for HGTV?

Love it!! HGTV has some of the best shows on TV. I will definitely be watching it.