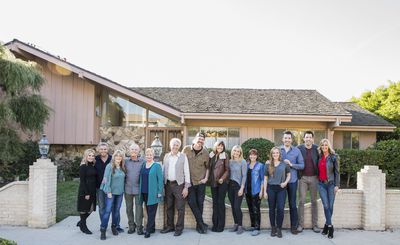 A Very Brady Renovation wraps its run on HGTV later tonight, but it might not be the last you see of the house or the Brady family. HGTV is looking at the possibility of a holiday special set at the finished house later this year. The holidays were always special on The Brady Bunch. No word on when the special will air.

A Very Brady Renovation premiered on September 9th. Brady fans tuned in and made the premiere a huge hit for HGTV. After the premiere aired, The Hollywood Reporter shared that 3.36 million tuned in to watch the Brady kids return to renovate the home that was used for exterior shots of The Brady Bunch. The actors worked alongside popular faces from other HGTV shows to make the interior of the home match the sound stages the sitcom was filmed on many decades ago. Each Brady kid took on a room and went to work.

HGTV is holding onto the house now, and it could pop up more than once in the future. Jane Latman, president of HGTV, said the following about the popularity of A Very Brady Renovation, per Deadline:

“We knew A Very Brady Renovation would exceed every expectation. This initial ratings and digital performance report has been nothing short of impressive and our entire team is celebrating. The Brady Bunch is a pop culture phenomenon with incredible appeal, so we expect viewers to return week after week to watch how HGTV renovated and replicated the real Brady Bunch house.”

A Very Brady Renovation airs its finale on HGTV tonight at 9PM.

What do you think? Are you a fan of this renovation series? Do you want to see more from the Brady house on HGTV?

I am saddened that the renovation is over. I have LOVED every minute of it. It was like my own family reunion. The 6 Brady “kids” were phenomenal in this. Learning that Bobby and Cindy played “kissy face” in the dog house is priceless. I’d love to see anything Brady. It takes me back to a time of innocence and clean wholesome fun. Meeting these 6 actors is at the top of my bucket list. Yes, by all means, have a Christmas reunion. Thank you.

I want to see a spin off TV show of the Bradys all grown up, using of course. this house! It would certainly be a hit. I would love it it and I know it would be one of my favorite shows .The Bradys could bring world peace and stop politicians from fighting.. because No matter what religion no matter what political affiliation everyone loves the Bradys.They can do anything and they all are such a fresh breath air after so much hate filled TV

Loved it!!! Brought back so many memories.
Please keep me posted on upcoming events with it and can not see what you do with it.
Would be nice to see you rent it out to visitors to experience it. ❤

I’d love to tour the place and maybe even spend the night. That would be awesome.

Loved the reno series. I thought about “Carol” the whole time. I would like to see a Christmas special from the house.

Loved watching ,l would love to see more of the Brady house and the Brady kids lol

Love the Brady show would love more from them..

My husband & I enjoy the show, however, we shake our heads each week, saying, “who in their right mind would buy that “remodeled” home and leave it that way?” It’s a whole lot of money to spend doing something that is so impractical and, in some cases, ugly for today’s standards. It should be a museum or a tourist attraction, but in that residential neighborhood, not likely. As entertaining as the renovation show has been, we think it’s also been a huge waste of money on that particular remodel.

I totally agree with you. The remodel was a waste of time and money. The Brady Bunch era is over.

Is Desert Flippers & Flip has r Flo Nashville being renewed.?