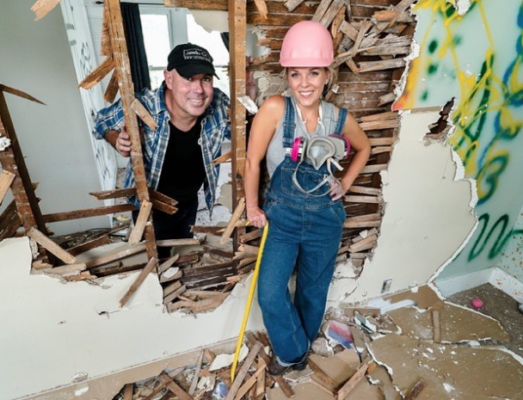 HGTV is heading to Nashville. Recently, the network announced their new TV show Music City Fix will premiere in June.

New York [May 9, 2018] Business is booming for expert house flippers Dave and Kortney Wilson who star in the new HGTV home renovation series Music City Fix. Premiering Thursday, June 7, at 11 p.m. ET/PT, the 10-episode season will follow the couple as they breathe new life into old, rundown homes in Nashville’s most desirable neighborhoods. The series will feature Dave and Kortney as they manage limited timelines and tight budgets to create beautiful designs that transform property disasters into stunning dream homes.

“We buy houses cheap, make them gorgeous and sell them for big profit,” said Dave.

“There’s always a challenge that comes with taking on an older house,” added Kortney. “Sometimes there’s a lot to preserve and sometimes we have to create things that bring character into the house.”

The series kicks off as Dave and Kortney snap up a crumbling Craftsman bungalow in the trendy East Nashville area. Looking to capitalize on the historic character of this rare find, Kortney incorporates many of the home’s original features, including the mantel, front door and kitchen credenza, into the new design plan. When unsalvageable original hardwood floors compromise their already inflated budget, the duo decides to take a risk with the listing price to recover their profit margin.

For exclusive photos and videos throughout the season, fans can visit the Music City Fix show page at hgtv.com/shows and interact on social media using #MusicCityFix.”

What do you think? Are you a fan of home renovation shows? Will you watch Music City Fix?

I also Love this show! I have been looking for them everyday! Until they start a new season, “Please” show us their reruns!!

I love, love, love this show! I do miss the 1 hour version but this works!

Oh my goodness! Dave and Kortney are two of the best people on HGTV! I love how natural and relaxed they are on camera. Kortney is wildly creative, her design looks are never cookie cutter and NEVER “farmhouse”. They get 10 stars from me! **********

Liked this show a lot. Wish it came on earlier.