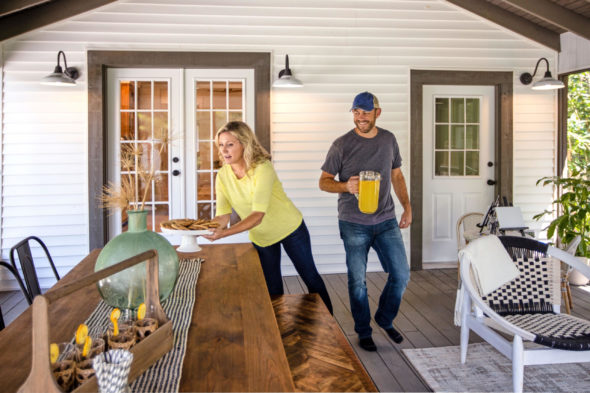 HGTV is getting ready to air brand new episodes of Fixer to Fabulous. The renovation series will return with its second season later this month. Dave and Jenny Marrs will show viewers more homes that go from being fixer-uppers to fabulous under their care.

HGTV revealed more about the return of the series in a press release:

“Popular home renovators Dave and Jenny Marrs bring more worn-out houses back to life when a new season of Fixer to Fabulous premieres on HGTV Tuesday, Oct, 27, at 9 p.m. ET/PT. In the new 13-episode run, the husband-wife duo—who attracted more than 17.9 million viewers to the first season of Fixer to Fabulous—continue to overhaul old homes in Northwest Arkansas, all while raising five young children and managing their family farm. Jenny, the creative influence behind their personalized renovations, specializes in designing spaces that are warm and welcoming for families, while Dave tackles the construction with aplomb, crediting his passion for reviving old homes.

“We love our town and are proud to live and work here and show off this special place to the world,” said Dave.

“Last season was a blast and from a design prospective this season is going to be even more fun,” added Jenny. “Each of our client’s homes showcase a different design style and give us the opportunity to create a space that truly reflects who lives there.”

In the premiere episode, Dave and Jenny fix up a dated lakehouse for a deserving family, transforming it into a modern Nantucket-style waterfront escape. The renovation calls for several custom projects, including a refreshed boathouse, a one-of-a-kind carved inlay in the foyer and a soda-shoppe inspired teenage hideaway. As the season continues, Dave and Jenny’s breathtaking renovations spotlight custom elements that they design and curate for each project, such as a secret bookshelf doorway to a laundry room, a reclaimed console with a hidden pop-up TV panel and a dining table made from reclaimed basketball court flooring.”

What do you think? Are you a fan of Fixer to Fabulous on HGTV? Will you watch season two when it starts later this month?

My husband and I love this show! Jenny and Dave have great chemistry and and so enjoyable to watch. Jenny is awesome at describing the changes and decor and Dave’s work working is incredible. The Looney’s are a great addition and we hope they are included more in the upcoming season! The Mar’s relationship is so all-American and just a joy to watch and listen to. I can watch and re-watch the episodes because of the likability of the Mars’ and the other characters! I can’t wait for their season 4 to be released… I would binge watch all of… Read more »

Love the show and family. Great work to watch. Never miss it.

This show is great! Jenny and Dave work so hard. Love the kids. Can learn a lot from show. Can’t wait for October.

Love this show! Is it back for season 3?

I love this show. It is such a down to earth show. The cast is wonderful. I hope this show continues for years. The work Dave and Jenny do is awesome. Great craftsmanship and design combination.

Best program, thank you for putting it on prime time. The Marrs are so down to earth & seem like a real family.

Definitely will watch—enjoyed the past season!