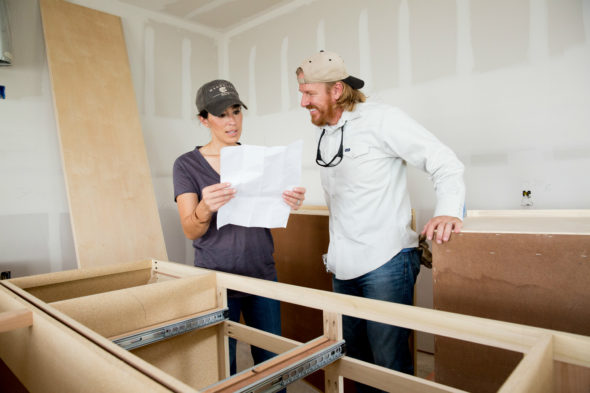 Chip and Joanna Gaines are at it again. Today, HGTV announced their new TV show Fixer Upper: Behind the Design will premiere in April.

The behind-the scenes series will “give fans a never-before-seen look at the coveted design secrets featured in Fixer Upper.”

Fixer Upper: Behind the Design premieres on HGTV on April 10th at 8 p.m. ET/PT.

New York [March 1, 2018] Fixer Upper: Behind the Design, starring Chip and Joanna Gaines, will give fans a never-before-seen look at the coveted design secrets featured in Fixer Upper. Premiering on Tuesday, April 10, at 8 p.m. ET/PT, each half-hour episode will air after its Fixer Upper companion episode at 7 p.m. ET/PT. The new 15-episode series will highlight how Joanna creates breathtaking designs—from strategy to staging—in each stunning overhaul. Super fans of Fixer Upper can expect to see rooms that were not included in original episodes of the series.

“I can’t wait to show our fans how every piece of the design comes together before the final reveal,” said Joanna. “I want to nail every detail so that, when we walk away, Chip and I know we’ve given a family the one-of-a-kind home of their dreams.”

In Fixer Upper: Behind the Design, Joanna will meet with homeowners to learn about their personal style preferences. From Parisian-inspired palettes to cozy cottage chic and rustic coastal cool, she will choose complimentary elements for each newly designed space. Fans will get an inside look at Joanna’s hand-picked selections, including paint colors, cabinet hardware, decorative accessories and furnishings. As always, Chip will bring her vision to life with amazing home renovations.

“Jo puts her heart and soul into every fixer upper we design,” added Chip. “Our hope is that these homes become a beautiful part of each family’s next chapter.”

What do you think? Are you a fan of Fixer Upper? Will you watch the new companion show?

I was never a fan of these type shows, but a lady friend got me hooked! Fixer Upper is great, and the Gaines are truly an interesting couple! Great job, and keep on producing more!

I love this show. It’s so much fun to see their family and watch the kids grow and see them part of the show.

A fresh, free-wheeling, and refreshing show. It even sounds unscripted….I really enjoy it.