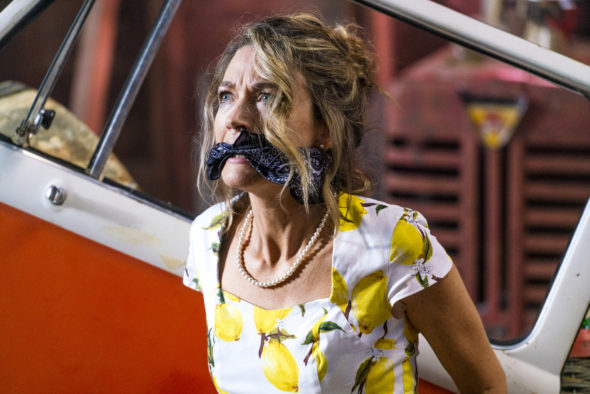 What will become of Delilah and the rest of the Parker family? Has The Detour TV show been cancelled or renewed for a fifth season on TBS? The television vulture is watching all the latest cancellation and renewal news, so this page is the place to track the status of The Detour, season five. Bookmark it, or subscribe for the latest updates. Remember, the television vulture is watching your shows. Are you?

Airing on the TBS cable channel, The Detour stars Jason Jones, Natalie Zea, Ashley Gerasimovich, Liam Carroll, and Daniella Pineda. In the fourth season of the road trip comedy, the Parker family embarks on world-wide search for their runaway teen daughter, Delilah, which spans from Tibet to Paraguay.

The fourth season of The Detour averaged a 0.26 rating in the 18-49 demographic and 722,000 viewers. Compared to season three, that’s down by 31% and 27%, respectively. Learn how The Detour stacks up against other TBS TV shows.

Will TBS cancel or renew The Detour for season five? The channel has cancelled a few of its scripted comedy series in the past year and this one is still doing okay (when compared to other TBS comedies) so, I think it will be renewed, perhaps for a final season. I’ll update this page as soon as I have official news. Subscribe for free alerts on The Detour cancellation or renewal news?

9/4/19 update: The Detour TV show has been cancelled so there won’t be a fifth season, at least on TBS.

What do you think? Should The Detour TV show have been renewed for a fifth season? Are you sorry that TBS cancelled this TV show, instead?

Detour should definitely have aired a 5th season. We need more laughter now than ever, and this series was definitely a laugh out loud series!!

I do not think The Detour should come back for a 5th season. The 4th season was terrible.

I love loves love this show! Hope it renews!