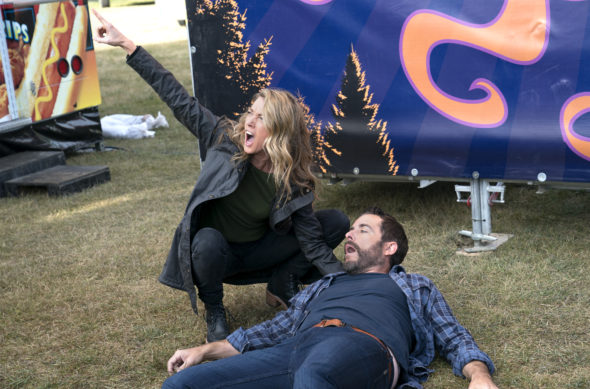 Where in the world will the Parkers wind up? Has The Detour TV show been cancelled or renewed for a fourth season on TBS? The television vulture is watching all the latest cancellation and renewal news, so this page is the place to track the status of The Detour, season four. Bookmark it, or subscribe for the latest updates. Remember, the television vulture is watching your shows. Are you?

Airing on the TBS cable channel, The Detour stars Jason Jones, Natalie Zea, Ashley Gerasimovich, Liam Carroll, and Daniella Pineda. In season three of the road trip comedy, after a year on the run, the Parkers wind up in Alaska, where they try to settle down in a community full of misfits.

The third season of The Detour averaged a 0.37 rating in the 18-49 demographic and 989,000 viewers. Compared to season two, that’s down by 11% in the demo and down by 8% in viewers. Learn how The Detour stacks up against other TBS TV shows.

Will TBS cancel or renew The Detour for season four? The ratings have been pretty steady and TBS seems to want to continue to have their own a stable of original comedies. So, I believe this show will be renewed. I’ll update this page as soon as I have official news. Subscribe for free alerts on The Detour cancellation or renewal news?

5/11/2018 Status Update: The Detour has been renewed for season four on TBS. Details here.

What do you think? Did you think The Detour TV show would be renewed for a fourth season? How would you feel, had TBS cancelled this TV show, instead?

When will The Detour start up again?

While I enjoy the show and hope it is renewed for a fourth season, some elements of Season 3 have come dangerously close to “jumping the shark”. I hope the writers can get the plot more realistic if they are given a fourth season, because at it’s present trajectory, I expect to see The Fonz showing up soon.

I love this show! Not gonna lie, I was ugly sobbing at the season finale.
I hope it gets another season

My husband and I absolutely Love this show !!! It’s Hilarious, we’ve told numerous people to watch it!! Definitely hope it’s renewed for many more seasons!!!

This is a great show. I hope that it is renewed for season four.

My wife and I LOVE this show, and hope we are in the demo that TBS is looking for (early 50s, $175,000 household income). PLEASE renew this show for another year or two ir three ….

This is one of the best shows currently on TV — they should contract this for another 5 years. Keep em coming.

GREAT TV SHOW. SMART & FUNNY. TELEVISION NEEDS THIS SHOW AND MORE LIKE IT.

Great comedy. Television needs this show and more like it.