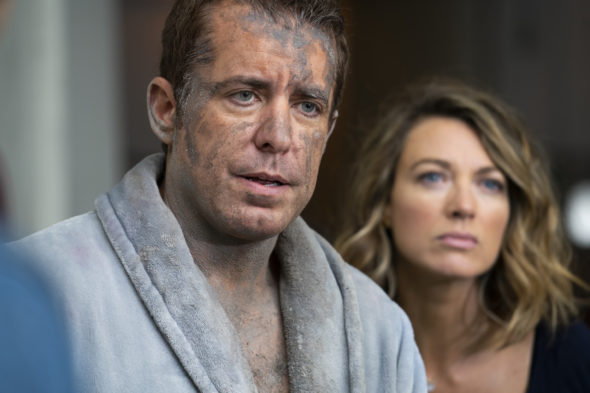 Do the Parkers do right by Delilah during the fourth season of The Detour TV show on TBS? As we all know, the Nielsen ratings typically play a big role in determining whether a TV show like The Detour is cancelled or renewed for season five. Unfortunately, most of us do not live in Nielsen households. Because many viewers feel frustration when their viewing habits and opinions aren’t considered, we’d like to offer you the chance to rate all of the season four episodes of The Detour here. *Status update below.

A TBS sitcom, The Detour stars Jason Jones, Natalie Zea, Ashley Gerasimovich, Liam Carroll, and Daniella Pineda. In the fourth season of the road trip comedy, the Parker family embarks on world-wide search for their runaway teen daughter, Delilah, which spans from Tibet to Paraguay.

What do you think? Which season four episodes of The Detour TV series do you rate as wonderful, terrible, or somewhere between? Should TBS to cancel or renew The Detour for a fifth season? Don’t forget to vote, and share your thoughts, below.

*9/4/19 update: The Detour TV show has been cancelled so there won’t be a fifth season, at least on TBS.

I’m sorry to say that the last episode was awful! One would assume that any season finale would be the highlight of the season, but in this case it wasn’t. The ending assumes another season [Nate getting shot up] but I don’t think that’s going to happen. Don’t get me wrong. We [the kids in this year’s drama class] love Ashley [she’s beautiful and nice to look at] and we really want to see more of her, but the writers can’t seem to capture the action, comedy and feelings of the first two seasons. My drama class took a vote… Read more »

This season is AWFUL!!! Cancel for sure.

First, I have to say that the first two seasons were awesome. They dealt with real life issues while being funny and even though the themes were adult in nature, the young cast members handled their rolls with awesome professionalism and superior acting. But it went down from there, starting with Season 3. This is supposed to be about a dysfunctional family and the kids were mostly missing in Season 3 and whatever scenes they had very short. I’m from the generation that can relate to many of the issues that the show raises and tires to bring a comic… Read more »

The Detour started as a FUNNY, unpredictable show that left you waiting anxiously for the next episode. There was the ongoing saga w the statue piece they were carrying that was a total shock to a lackluster sophomore showing. As the story line gets more farfetched watching has become tedious. No longer relying on the sex and gross out tactics of NY and Alaska they simply have the couple barking at each other w Nate’s overdone physical antics.