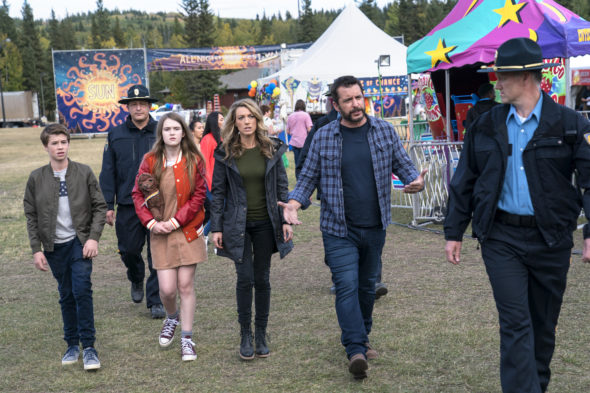 Are you a fan of The Detour? Recently, co-creator Samantha Bee and director/star Natalie Zea spoke with IndieWire about the future of the TBS TV show.

The comedy series centers on a family that gets seriously derailed on a road trip from New York to Florida. The cast includes Jason Jones  Natalie Zea, Ashley Gerasimovich, and Jared Liam Carroll.

The Detour is set to air its season four finale on August 20th, but will there be a fifth season? Star and director Natalie Zea told IndieWire it’s frustrating the TBS series hasn’t received more attention:

However, they may be hope for the family comedy. Co-creator Samantha Bee said she thinks the show would perform well on a streaming service like the upcoming HBO Max:

I’m really hoping people will gravitate to it. I think it would fare very well on a streaming service, actually, because it is the type of show you can 100 percent binge. I actually think if it makes it onto the WarnerMedia streaming service, it will do very well there. It kind of needs that in order to catch on.”

As of reporting, TBS has not renewed The Detour for a fifth season and Hulu owns the streaming rights to seasons one through four.

What do you think? Are you a fan of The Detour? Would you watch it on a streaming service?

Hoping The Detour is renewed for a Fifth Season. It’s original storyline and dialogue is funny as hell and Jason Jones is just incredibly funny.

It would be awesome if the Detour was renewed on HBO or MAX. That way we can see a lot more of the cast nude and watch more adult mature themes. That would definitely be worth a Season 5.

The Detour is a one of a kind comedy series. It is ridiculously funny. I would absolutely watch it on a streaming service. I think if more people were aware of it and gave it a chance, it would be hugely successful. Very sad to find out it has been cancelled.

0
-1
Reply
Please Save The Detour

The Detour is the best. They can’t leave it on that last cliffhanger. I wish more people would talk about it, too. It’s so off-the-wall nuts and unique.

I love the The Detour, its like a new age National Lampoon’s vacation TV show. I believe in God and some things written for the show turn me off. Because of the mocking which is absolutely not needed for this hilarious show. Lay off that a little and someone like Netflix ect. will pick it up. People are tired of paying for 50 streaming services. We are big fans. Other than bringing up nonsense like there is no God ect. Not needed. This shows a winner. Fight for it. I never thought I’d like it. Luckily I watched it. After… Read more »

The Detour is one of the most well-balanced, funniest shows of all time. Jason and Natalie are perfect together and their two kids are terrific. Please keep The Detour on the road!

We love The Detour. It’s hilarious and we hope it’s not canceled on TBS. we do not have streaming services or any of the premium channels, such as HBO, Cinemax, Showtime. Please keep this show!

I would watch The Detour anywhere!

Yes..the Detour is good and needs more time because it’s a little “off the wall”. I would like to see it renewed for a 5th season

If you like an offbeat quirky comedy The Detour is for you. This, not for children, family comedy is really about a solid commitment by a husband and wife to keep their family together during really outrageous comedic situations. Creators will hopefully find a home for season 5. Great show!

Please bring back The Detour! It is by far the funniest, well written entertaining show in a long time! The actors fit so well together!