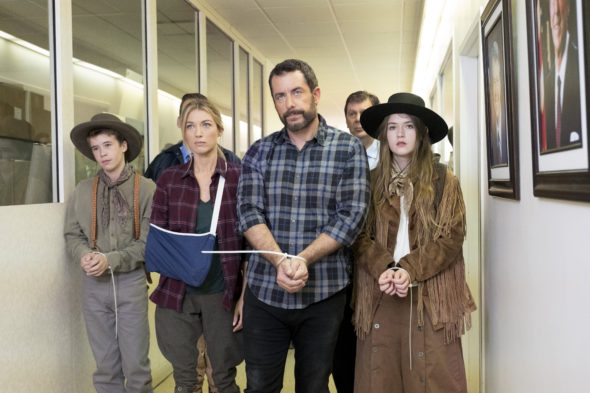 Break out the maps and charge up your GPS. TBS has renewed The Detour TV show for a fourth season of wild and wacky road-trip shenanigans. Watch the announcement below. While the third season ran between January 23rd and March 27th of 2018, the season four release date is TBD.

A TBS sitcom, The Detour stars Jason Jones, Natalie Zea, Ashley Gerasimovich, and Liam Carroll. In season three, after a year on the run, the Parkers wound up in Alaska, where they tried to settle down in a community full of misfits. Where will they land in season four of The Detour? Stay tuned.

TBS has ordered up another season of hilarious misadventures with TV’s most dysfunctional family. After a bonkers road-trip, a disastrous move to New York City, and a run from the law in Alaska, the Parkers will be back for a fourth season of The Detour, one of cable’s top 10 comedies. With the return of The Detour, TBS is building on the extraordinary success of a 100% renewal rate since the network’s rebrand in 2016.

Created, written and executive-produced by Jason Jones and Samantha Bee, The Detour is an all-too-honest look at the family dynamic. Jones stars in the acclaimed comedy with Natalie Zea, Ashley Gerasimovich and Liam Carroll. Season 3 reached more than 25 million viewers across TBS’ linear, VOD and digital platforms, reaching an increase of 74% in digital views.

The Detour has been hailed as “one of the most underrated shows on TBS and in all of TV” (Indiewire) and “a surprising, fun, and filthy take on the family sitcom.” (Splitsider). The Detour is executive–produced by Jason Jones, Samantha Bee and Brennan Shroff.

What do you think? Are you still watching The Detour TV series? Did you expect it to be cancelled or renewed for season four?

I LOVE THIS SHOW! it actually brought me back to TBS where I now watch several shows. I hadnt been a TBS viewer in quite some time. I cant wait for season 4 to start and i hope this show doesnt end up like a ton of other great shows that end up getting cancelled especially when it is to make room for some new show that sucks compared to the one cancelled. I dont know who decides this stuff but some of the people on some networks are clueless!

Greatest show that’s come out in years. Been ages since i’ve made it a priority to make sure I was home to catch it. I hope this show continues for years to come. Not to mention the show really pays attention to it’s fans considering I received a huge box from the tv show with a bunch or goodies. Never in my life have I received such gifts.

Absolutely love this show!!!! We have tears coming down our faces with laughter. Please TBS, don’t take this “GEM” away from us!! Great time slot when all the kids are sleeping!!! Omg we can only watch so much Everbody Loves Raymond and King of Queens!! The Detour is Original!! You don’t see that much anymore. Thank you so far for 3 amazing seasons. Keep up the stellar work!!

Love this show. It’s funny, with quick humor, not canned. I love Jareb the best.

Great show and always something different with each season.