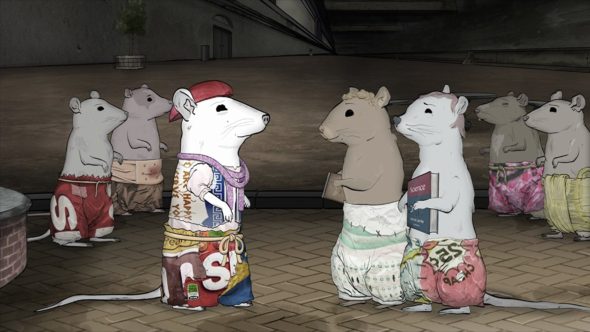 HBO has announced that their Animals TV show will return for a third season on Friday, August 3rd. Created by Phil Matarese and Mike Luciano, this animated series revolves around animals who try to survive in New York City. In season three, “the genre-bending show visits a humanless, post-apocalyptic Big Apple, blending live-action and animated segments along with the show’s usual eclectic casting.”

Here’s the press release, which includes a long list of guest actors.

ANIMALS. focuses on the downtrodden creatures native to Earth’s least-habitable environment: New York City. For its wide-ranging third season, the genre-bending show visits a humanless, post-apocalyptic Big Apple, blending live-action and animated segments along with the show’s usual eclectic casting. It is a wholly unique season of television that has never been done before.

Among the critical raves for the show, Vulture called it “one of the funniest, most idiosyncratic shows on television,” noting that the series “always fills a viewer with glee,” while Decider described ANIMALS. as an “offbeat hidden gem” and “bitingly funny.”

The animation for ANIMALS. was produced with Dan Harmon’s Starburns Industries, the studio known for the TV series “Rick & Morty” and the feature film “Anomalisa.”

What do you think? Do you like the Animals TV show? Do you plan on watching season three on HBO?