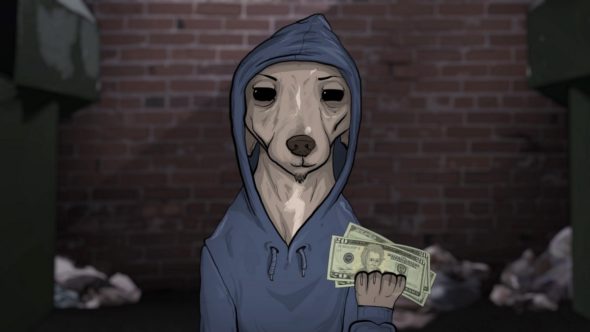 Has humanity’s disappearance helped the animals? Is the Animals TV show cancelled or renewed for a fourth season on HBO? The television vulture is watching all the latest cancellation and renewal news, so this page is the place to track the status of Animals season four. Bookmark it, or subscribe for the latest updates. Remember, the television vulture is watching your shows. Are you?

An HBO animated adult comedy, Animals features the critters that live in (and off of) the Big Apple. The voice cast includes Phil Matarese, Mike Luciano, who voice several characters. The third season unfolds in a human-less, post-apocalyptic New York City and blends live-action with animated segments.

The third season of Animals averaged a 0.05 rating in the 18-49 demographic and 184,000 viewers. Compared to season two, that’s down by 38% and 24%, respectively. Learn how Animals stacks up against the other HBO TV shows.

Will HBO cancel or renew Animals for season four? The linear ratings have been so low, it’s amazing it was renewed for a third season. I can’t see them bringing Animals back for a fourth round but HBO may just like having an animated series on their schedule. I’ll update this page with breaking developments. Subscribe for free Animals cancellation or renewal alerts.

10/17/18 update: HBO has cancelled the Animals series so there won’t be a fourth season. Details here.

What do you think? Were you hoping that the Animals TV show would be renewed for season four? Are you sorry that HBO cancelled this TV series, instead?