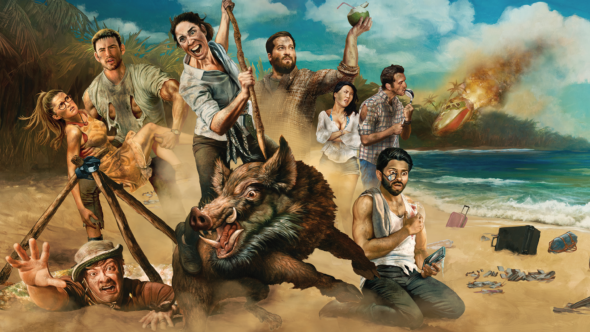 Can the survivors make it through a new season of threats? Has the Wrecked TV show been cancelled or renewed for a fourth season on TBS? The television vulture is watching all the latest cancellation and renewal news, so this page is the place to track the status of Wrecked season four. Bookmark it, or subscribe for the latest updates. Remember, the television vulture is watching your shows. Are you?

A single-camera comedy on TBS, Wrecked stars Ally Maki, Asif Ali, Brian Sacca, Brooke Dillman, Jessica Lowe, Rhys Darby, Will Greenberg, and Zach Cregger. Guest stars include Rob Corddry, Eugene Cordero, Jonno Roberts, Karan Soni, Rachel House, Robert Baker, and Will Hines. The TBS satirical comedy follows a diverse group of strangers who are stranded on a deserted island after a plane crash. This season, the castaways find themselves shipwrecked on a mysterious billionaire’s private island. They’re forced to hunt each other to the death in a basic-cable battle royale.

The third season of Wrecked averaged a 0.32 rating in the 18-49 demographic and 846,000 viewers. Compared to season two, that’s down by 19% and down by 16%, respectively. Learn how Wrecked stacks up against other TBS TV shows.

Will TBS cancel or renew the Wrecked TV show for season four? The series is down in the ratings but my gut says that the channel will still renew it. I’ll update this page as needed. Subscribe for free updates on any Wrecked cancellation and renewal news.

2/11/19 update: TBS has cancelled the Wrecked series so there won’t be a fourth season.

What do you think? Were you hoping that the Wrecked TV show would be renewed for a fourth season? Are you sorry that TBS cancelled this TV show, instead?

Oh my god. This is the funniest damn show ive seen in ages. It cannot end here. We need more steve or stewart…..