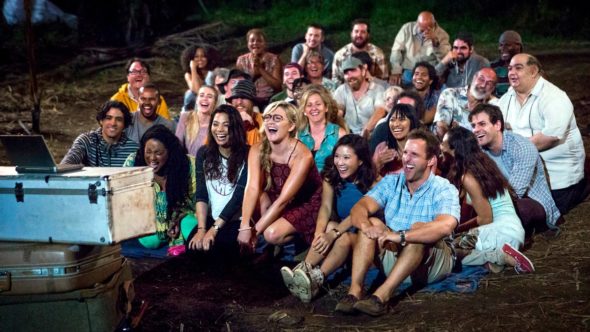 Will the castaways be forever lost at sea on the Wrecked TV show on TBS? As we all know, the Nielsen ratings typically play a big role in determining whether the Wrecked TV show is cancelled or renewed for season four. Unfortunately, most of us do not live in Nielsen households. Because many viewers feel frustration when their viewing habits and opinions aren’t considered, we invite you to rate all of the season three episodes of Wrecked below. *Status update below.

A single-camera comedy, Wrecked stars Ally Maki, Asif Ali, Brian Sacca, Brooke Dillman, Jessica Lowe, Rhys Darby, Will Greenberg, and Zach Cregger. Guest stars include Rob Corddry, Eugene Cordero, Jonno Roberts, Karan Soni, Rachel House, Robert Baker, and Will Hines. The TBS satirical comedy follows a diverse group of strangers who are stranded on a deserted island after a plane crash. This season, the castaways find themselves shipwrecked on a mysterious billionaire’s private island. They’re forced to hunt each other to the death in a basic-cable battle royale..

What do you think? Which season three episodes of the Wrecked TV series do you rate as wonderful, terrible, or somewhere between?

*2/11/19 update: TBS has cancelled the Wrecked series so there won’t be a fourth season.

Every episode of Wrecked is hilarious. I think this is really how people would act in this situation for the most part. I watch at least 1 episode a day on my DVR or TBS.com. Keep it on the air! Keep the funny come backs especially from Karen.