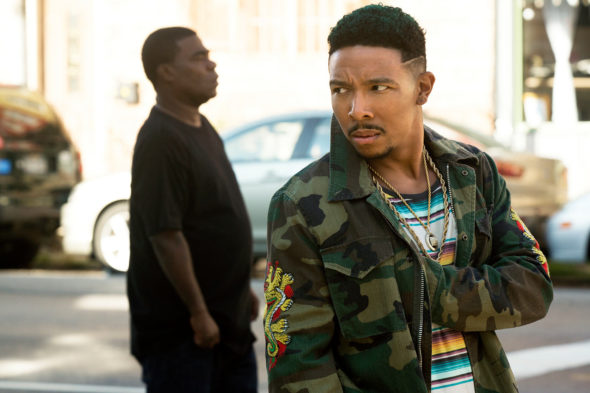 Is Tray staying on the straight and narrow? Has The Last OG TV show been cancelled or renewed for a second season on TBS? The television vulture is watching all the latest cancellation and renewal news, so this page is the place to track the status of The Last OG, season two. Bookmark it, or subscribe for the latest updates. Remember, the television vulture is watching your shows. Are you?

A TBS sitcom from creators Jordan Peele and John Carcieri, The Last OG stars Tracy Morgan, Tiffany Haddish, Cedric the Entertainer, Allen Maldonado, Ryan Gaul, Taylor Mosby, Dante Hoagland, Joel Marsh Garland, Gino Vento, Derek Gaines, and Daniel J. Watts. The comedy centers on Tray (Morgan), who is released from prison after 15 years. Finally a free man, Tray returns to Brooklyn, only to find it gentrified. Meanwhile, his old love, Shay (Haddish), has married a white guy. What’s worse — she and Josh (Gaul) are raising the teenaged twins (Mosby and Hoagland), Tray never even knew about. Now he’s got to try to adapt to life on the outside and learn to be a father, when it seems everything he knew is gone.

The first season of The Last OG averaged a 0.49 rating in the 18-49 demographic and 1.21 million viewers. Learn how The Last OG stacks up against other TBS TV shows.

Although it premiered with very strong numbers for this basic cable channel, it is still too early to use the ratings to predict whether The Last OG will be cancelled or renewed for season two. For now, I’ll keep an eye on the Nielsens and update this page with breaking developments. Subscribe for free updates on any The Last OG cancellation or renewal news.

4/23/2018 status update: The Last OG has been renewed for season two on TBS. Details here.

What do you think? Did you think The Last OG TV show would be renewed for season two? How would you feel if TBS had cancelled this TV show, instead?

Just started watching the Last OG this week and absolutely love the show. I binged watched all the episodes I could find 0n-demand. This seems to be one of the most real shows I’ve watched in a long time, Tracy is amazing, funny, sincere and caring, something we should all strive for. In fact all the actors seem so real because of the great scripts, great directing and the actor’s skills. Please don’t cancel this show, keep making it better and advertising the show until it’s number one on TBS and across all networks. Was very disappointed when watching Willie… Read more »