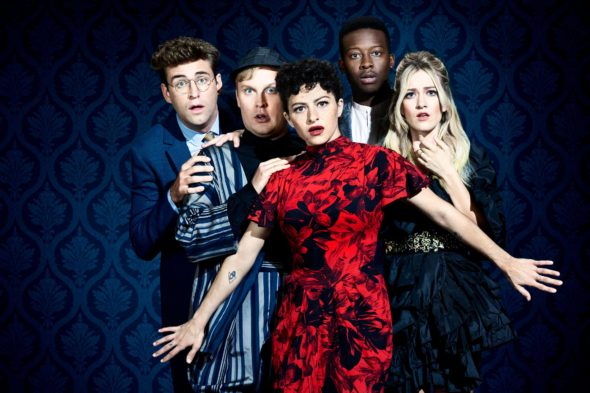 Will Dory and the gang ever find Chantal? Has the Search Party TV show been cancelled or renewed for a third season on TBS? The television vulture is watching all the latest cancellation and renewal news, so this page is the place to track the status of Search Party, season three. Bookmark it, or subscribe for the latest updates. Remember, the television vulture is watching your shows. Are you?

The second season of Search Party averaged a 0.19 rating in the 18-49 demographic and 554,000 viewers. Compared to season one, that’s down by 3% in the demo and up by 15% in viewers. Learn how Search Party stacks up against other TBS TV shows.

Will TBS cancel or renew Search Party for season three? Though TBS opted to run the second season episodes in pairs on Sunday nights, the ratings held up. The show reportedly does well for the cable channel via delayed viewing. I suspect that they will renew the show for a third season. Subscribe for free updates on any Search Party cancellation or renewal news.

10/7/2019 update: The series has been renewed for a fourth season but both seasons three and four will be released on HBO Max.

What do you think? Are you happy the Search Party TV show was renewed for a third season? How would you feel if TBS had cancelled this TV show, instead?

Please don’t cancel search party. I’ve been patiently waiting and hoping for a third season. I love all the characters. I love how they’ve all drifted into terrible trouble, but still they support each other. Well mostly. Any way, please make at least two more seasons. We’re just getting to know the characters. We want to see what happens next….

I was surprised with how much I fell in love with search party! I mean, really, it’s not at all what I expected.. it’s a good solid show with an awesome hilarious storyline. Plleaaassseeeee come back for Season 3 !!