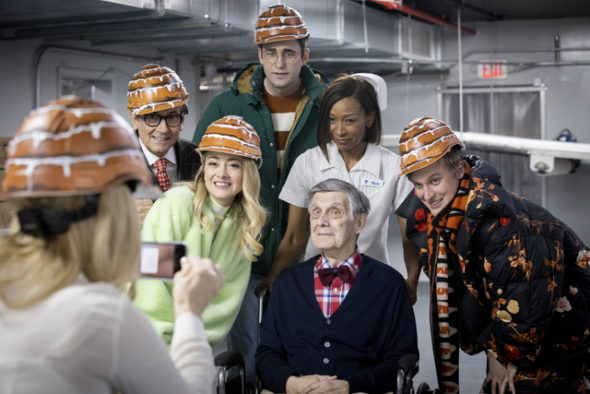 Will Dory be found? Has the Search Party TV show been cancelled or renewed for a fifth season on HBO Max? The television vulture is watching all the latest cancellation and renewal news, so this page is the place to track the status of Search Party, season five. Bookmark it, or subscribe for the latest updates. Remember, the television vulture is watching your shows. Are you?

Streaming on the HBO Max subscription service, Search Party stars Alia Shawkat, John Early, Meredith Hagner, John Reynolds, and Cole Escola. Guest stars include Susan Sarandon, Busy Philipps, Ann Dowd, Griffin Dunne and Lillias White, with author R.L. Stine in a cameo role. The dark comedy mystery series centers on a group of self-absorbed twenty-somethings. After an old college acquaintance disappears, they become entangled in an ominous mystery. In season four, Dory (Shawkat) is held prisoner by her psychotic stalker Chip (Escola), who is determined to make her believe that they are best friends. Portia (Hagner) stars in a film about the trial (although not as herself). Elliott (Early) switches party lines to become a far-right conservative talk show host and Drew (Reynolds) tries to escape his dark past by working as a costumed cast member in a theme park. As the friends begin to connect the dots that Dory might not be touring Europe as her faked social media suggests, they must decide whether to put their traumatic pasts behind them and once again become a search party — but this time, for Dory.

Unless they decide to publicize viewership, it is difficult to predict whether HBO Max will cancel or renew Search Party for season five. Since HBO Max isn’t ad-supported, it can take a chance on series it believes in, but sooner or later it comes down to production costs, versus viewership numbers. Based on the fact that the show attracts notable guest stars and doesn’t seem overly expensive to produce, I think it will be renewed. I’ll keep my ears open and an eye out for news, and will update this page with breaking developments. Subscribe for free alerts on Search Party cancellation or renewal news.

2/10/21 update: Search Party has been renewed for a fifth season on HBO Max.

What do you think? Are you glad the Search Party TV show has been renewed for a fifth season? How would you feel if HBO Max had cancelled this TV series, instead?