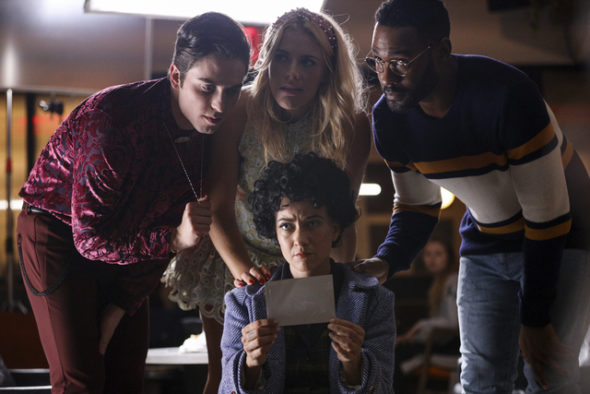 The searches will continue. The Search Party TV series has been renewed for a fifth season on HBO Max. In addition, showrunners Sarah-Violet Bliss and Charles Rogers have signed an overall deal with the streaming service.

Search Party stars Alia Shawkat, John Early, Meredith Hagner, John Reynolds, and Cole Escola. Guest stars include Susan Sarandon, Busy Philipps, Ann Dowd, Griffin Dunne, and Lillias White, with author R.L. Stine in a cameo role. The dark comedy mystery series centers on a group of self-absorbed twenty-somethings. After an old college acquaintance disappears, they become entangled in an ominous mystery. In season four, Dory (Shawkat) is held prisoner by her psychotic stalker Chip (Escola), who is determined to make her believe that they are best friends. Portia (Hagner) stars in a film about the trial (although not as herself). Elliott (Early) switches party lines to become a far-right conservative talk show host and Drew (Reynolds) tries to escape his dark past by working as a costumed cast member in a theme park. As the friends begin to connect the dots that Dory might not be touring Europe as her faked social media suggests, they must decide whether to put their traumatic pasts behind them and once again become a search party — but this time, for Dory.

HBO Max Picks Up SEARCH PARTY for a Fifth Season

HBO Max has picked up Max Original SEARCH PARTY for a fifth season and signed the series’ showrunners Charles Rogers and Sarah-Violet Bliss to a two-year overall deal to develop new programming for the streamer.

“We are thrilled that HBO Max has not only given the world a fifth season of ‘Search Party,’ but also shown this much faith in our partnership with them as we develop new projects for the platform,” said executive producers Sarah-Violet Bliss and Charles Rogers. “Potential titles for upcoming shows include ‘Monkeys Love Manhattan’ and ‘The Pineapple Predicament.’ Those aren’t actual shows we would ever pitch but it exhibits that we can make up titles if we need to.”

“Charles and Sarah-Violet are the masters of genre-blending and we can’t wait to see what they come up with next!” said Sarah Aubrey, Head of Original Content, HBO Max. “It’s been a joy working with them – they are whip smart, wildly funny and have such a distinctive worldview – we couldn’t be happier that they are continuing to call HBO Max their home.”

The first episode of SEARCH PARTY season four is currently available to stream for free on HBO Max and the HBO Max website.

What do you think? Do you like the Search Party TV series? Are you glad that there’s going to be a fifth season on HBO Max?

Yes. Glad there will be a season 5. So glad everybody’s agreed to continue. Looking forward to it.