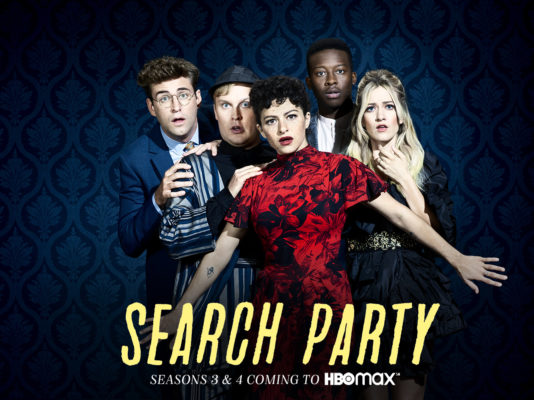 The dark comedy series Search Party has been renewed for a fourth season ahead of the third season’s premiere but, there’s a catch. The show is moving from the TBS cable channel to the HBO Max streaming service. Season three will begin streaming in Spring 2020.

On TBS, Search Party has historically drawn very low ratings. Season two averaged a 0.19 rating in the 18-49 demographic with 554,000 viewers. The second season finished airing in December 2017 and was renewed for a third season in April 2018.

Why is the show moving? “With HBO Max we have the unique opportunity to continue this brilliant, acclaimed series and connect with even more of the younger, digital natives who have worshipped it the most,” said Kevin Reilly, chief content officer, HBO Max and president TNT, TBS and truTV.

LOS ANGELES — October 7, 2019—HBO Max announced today that two more seasons of the critically beloved comedy Search Party will be coming to the streamer set to launch in Spring of 2020. The dark comedy about a group of privileged, self-absorbed twenty-somethings covering up a murder starring Alia Shawkat, Meredith Hagner, Brandon Micheal Hall, John Early and John Reynolds has repeatedly been hailed as one of television’s best shows by publications including The New Yorker, New York Times, Vanity Fair, Vogue, GQ, NPR, and more.

“With HBO Max we have the unique opportunity to continue this brilliant, acclaimed series and connect with even more of the younger, digital natives who have worshipped it the most,” said Kevin Reilly, chief content officer, HBO Max and president TNT, TBS and truTV.

Season three finds the gang swept up in the trial of the century after Dory and Drew are charged for the semi-accidental murder of a private investigator. As Elliott and Portia grapple with whether or not to testify as witnesses, the friends are pitted against each other and thrust into the national spotlight as notorious public figures. As Dory’s sanity begins to fracture, it becomes increasingly clear that they may not have brunch together for quite some time.

“Search Party is alive and thriving!! We are so thrilled to show the world what we’ve been working on the past two years and for new fans to find it on HBO Max,” said Sarah-Violet Bliss and Charles Rogers. “You’re going to love the two new seasons, but if for some reason you don’t, then you’ll get your subscription fee back. Actually, that’s not true. That’s a joke. We don’t have that kind of power.”

In praise of the show’s second season, reviewers have said the series is “a marvel in tonal balance, managing to be both grim and goofy” (Kevin Fallon, Daily Beast); “a strange and beguiling kind of pain, and I’m thoroughly hooked on it” (Richard Lawson, Vanity Fair); and “at once brooding and bleak and satirical and perceptive” (Margaret Lyons, New York Times).

About JAX Media
Founded in 2011, JAX Media is a television and film production juggernaut run by Partners Tony Hernandez, Lilly Burns, John Skidmore and Brooke Posch with offices in New York, Los Angeles and London. Jax Media has created a production model that allows talent to maintain control of their content and the results have been answered with awards and critical acclaim. As a company, they provide comprehensive production from development through post with a highly experience in-house production team who expertly implements the unique Jax Media model that has proven itself time and time again as a success for studios, networks and creatives alike.

JAX Media is behind numerous hit series and shows including include the critically acclaimed and Emmy nominated Russian Doll, starring Natasha Lyonne on Netflix, The Other Two, which was just picked up for a second season, and the final season of Broad City for Comedy Central. Jax Media is also currently in production on A Black Lady Sketch Show with Issa Rae and Robin Thede at HBO, Paul Rudd’s Netflix series Living with Yourself coming later this year and will be producing the recently announced Untitled Amy Hoggart Project. Additionally Jax Media produces Full Frontal With Samantha Bee
and Search Party, the recently launched Desus & Mero on Showtime, Younger on TV Land, and the new critical darling Florida Girls on Pop TV.

Not limited to episodic television, Jax Media has been a part of my numerous award winning comedy specials from some of the biggest names in comedy including (and not limited to) Chris Rock, Amy Schumer, John Mulaney, Ray Romano, Mike Birbiglia, and Jeffrey Ross. On the TV Side of things, Jax Media currently has 11 shows in production and was nominated for 18 Emmy Awards for the 2018-2019 TV season alone

What do you think? Have you watched the Search Party TV show on TBS? Do you think you’ll watch seasons three and four on HBO Max?