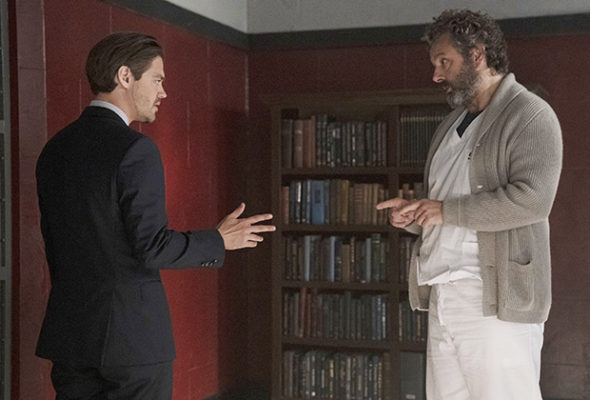 And, we have a winner. Prodigal Son is the first new TV series of the 2019-20 season to receive a full-season order. FOX has ordered nine additional installments, bringing the first season to 22 episodes.

The Prodigal Son TV series stars Tom Payne, Michael Sheen, Bellamy Young, Lou Diamond Phillips, Aurora Perrineau, Frank Harts, Halston Sage, and Keiko Agena. Malcolm Bright (Payne) is an extraordinary criminal psychologist who knows how killers think and how their minds work. In the 1990s, his father, Dr. Martin Whitly (Sheen), was a notorious serial killer called “The Surgeon” who killed at least 23 people. Since murder is “the family business”, Malcolm uses his twisted genius for good, to help the NYPD solve crimes and stop killers. He works alongside his longtime mentor, Gil Arroyo (Phillips), and two detectives — no-nonsense Dani Powell (Perrineau) and JT Tarmel (Harts), a born-and-bred New Yorker who questions whether Bright is a psychopath himself.

The first season of Prodigal Son on FOX is averaging a 0.98 rating in the 18-49 demographic and 3.97 million viewers. Two episodes have aired thus far.

The series premiere of PRODIGAL SON was the highest-rated new series on any network and helped lead FOX to its first victory on opening night of the broadcast season in ten years. PRODIGAL SON’s premiere also delivered 8.5 million multi-platform viewers, and more than 10 million viewers, including Friday’s encore telecast.

“PRODIGAL SON delivers a fantastic crime procedural with a complicated and compelling father-son relationship at its core, thanks to the stellar performances from Tom Payne and Michael Sheen,” said Michael Thorn, President, Entertainment, FOX Entertainment. “The series has razor-sharp writing, cinematic visuals and is an inventive twist on the genre. We want to thank our executive producers, Greg, Sarah, Chris and Sam, Peter Roth and our partners at Warner Bros., and the entire cast and crew. We can’t wait to see how this twisted journey continues to unfold.”

PRODIGAL SON centers on MALCOLM BRIGHT (Tom Payne, “The Walking Dead”), a psychologist who has a gift for understanding how serial killers think, because his father, DR. MARTIN WHITLY (Emmy Award and Golden Globe nominee Michael Sheen, “Masters of Sex,” “Frost/Nixon”), was one of the worst, a notorious serial killer called “The Surgeon.” Bright is the best criminal psychologist around and murder is the family business. He uses his twisted genius to help the NYPD solve crimes and stop killers, all while dealing with his manipulative mother, JESSICA WHITLY (Bellamy Young, “Scandal,” “Criminal Minds”), his annoyingly normal sister, AINSLEY WHITLY (Halston Sage, “The Orville”) and a homicidal father still looking to bond with his prodigal son, not to mention his own constantly evolving neuroses.

The only way Bright feels normal is by solving cases with the help of his longtime mentor, NYPD Detective GIL ARROYO (Emmy Award and Golden Globe nominee Lou Diamond Phillips, “Longmire,” “Stand and Deliver”). Arroyo’s one of the best detectives around, and he expects no less from his team – Detective DANI POWELL (Aurora Perrineau, “The Carmichael Show,” “Jem and the Holograms”), a headstrong no-nonsense cop who quickly becomes impressed with Bright’s work; and Detective JT TARMEL (Frank Harts, “Master of None,” “Billions”), a born-and-bred New Yorker who questions whether Bright is a psychopath himself.

In tonight’s all-new “Fear Response” episode airing 9:00-10:00 PM ET/PT on FOX, Malcolm gets his dream interview opportunity when the NYPD zeroes in on one of his and Martin’s favorite psychologists, Dr. Elaine Brown (guest star Sakina Jaffrey), who may be involved in a homicide linked to an LSD-laced psychology trial. Meanwhile, as his night terrors continue to evolve, Malcolm checks in with his trusted childhood therapist to discuss new theories on what exactly he witnessed as a child, and the consequences of Malcolm’s visits with The Surgeon begin to add up when Gil, Jessica and Ainsley catch wind that he has been seeing his father again.

PRODIGAL SON is produced by Berlanti Productions in association with Warner Bros. Television and FOX Entertainment. Greg Berlanti and Sarah Schechter serve as executive producers. Chris Fedak and Sam Sklaver are both executive producers, showrunners and writers on the series. Lee Toland Krieger directed and executive-produced the pilot.

What do you think? Have you been watching the Prodigal Son TV show on FOX? Are you glad to hear there will be more episodes? Based on what you’ve seen, are you hoping that it will be renewed for a second season?

Please renew Prodigal Son, the acting and story writing are incredible! It’s an amazing show and the season finale left me screaming for more! My #1 new favorite show! EVERY actor is amazing on it!

Prodigal son is the one show I enjoy watching! Please do not cancel.

I absolutely love this show more than anything else on tv for a while now i could watch it forever i would be devasted if there wasnt another. There has to ve another with the way the last episode ended