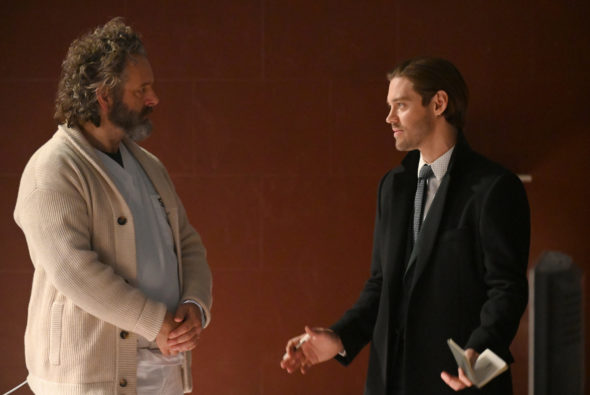 What is Martin’s ultimate goal? Has the Prodigal Son TV show been cancelled or renewed for a third season on FOX? The television vulture is watching all the latest cancellation and renewal news, so this page is the place to track the status of Prodigal Son, season three. Bookmark it, or subscribe for the latest updates. Remember, the television vulture is watching your shows. Are you?

Airing on the FOX television network, the Prodigal Son TV series stars Tom Payne, Lou Diamond Phillips, Aurora Perrineau, Frank Harts, Keiko Agena, Bellamy Young, Halston Sage, Michael Sheen, and Catherine Zeta-Jones. Season two guest stars include Christian Borle and Michael Potts. In the story, Malcolm Bright (Payne) is an extraordinary criminal psychologist who knows how killers think and how their minds work. In the 1990s, his father, Dr. Martin Whitly (Sheen), was a notorious serial killer called “The Surgeon” who killed at least 23 people. Since murder is “the family business”, Malcolm uses his twisted genius for good, to help the NYPD solve crimes and stop killers. He works alongside his longtime mentor, Gil Arroyo (Phillips), and two detectives — no-nonsense Dani Powell (Perrineau) and JT Tarmel (Harts), a born-and-bred New Yorker who questions whether Bright is a psychopath himself. In season two, Malcolm must deal with the repercussions of the first season finale and his father seeks to deepen his relationship with his prodigal son.

The second season of Prodigal Son averages a 0.40 rating in the 18-49 demographic and 2.05 million viewers. Compared to season one, that’s down by 46% in the demo and down by 39% in viewership. Find out how Prodigal Son stacks up against other FOX TV shows.

Will FOX cancel or renew Prodigal Son for season three? The network has very few drama series and this one does pretty well. I’m thinking that Prodigal Son will be renewed. I’ll update this page with breaking developments. Subscribe for free alerts on Prodigal Son cancellation or renewal news.

What do you think? Were you hoping that the Prodigal Son TV show would be renewed for a third season? Are you sorry that FOX cancelled this TV series, instead?

Sad that prodigal son was canceled

Prodigal Son is something I need to continue. I’m depressed without it.

64,005 signatures on the petition to save Prodigal Son tv series. Alright. Tell all your people to sign petition. Lets do this.

Over 66,300 signatures not bad. We need more. Keep signing the petition. Let’s save this show. 🙂

I want the petition to save Prodigal Son tv series on change .com to get 100,000 signatures on it. Lou Diamond Phillips is very upset about Fox cancelling Prodigal Son. Lets cheer him up by signing this fabulous petition so he can get his job back.