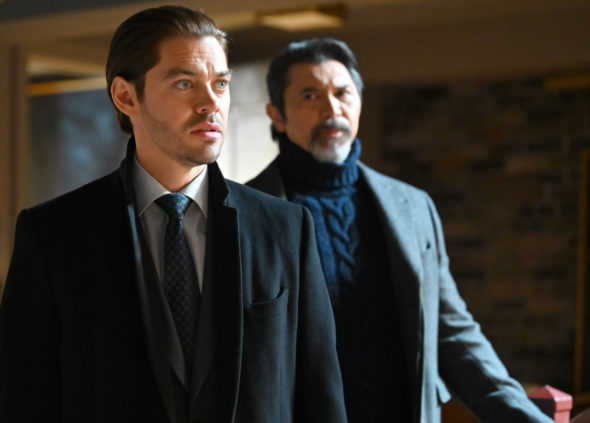 The cast and crew of the Prodigal Son received some sad news this week. FOX cancelled the drama so there won’t be a third season. While they’ve already filmed the defacto series finale (it airs on May 18th), they still have plenty to say.

A crime thriller series, the Prodigal Son TV series stars Tom Payne, Lou Diamond Phillips, Aurora Perrineau, Frank Harts, Keiko Agena, Bellamy Young, Halston Sage, Michael Sheen, and Catherine Zeta-Jones. Season two guest stars include Christian Borle and Michael Potts. In the story, Malcolm Bright (Payne) is an extraordinary criminal psychologist who knows how killers think and how their minds work. In the 1990s, his father, Dr. Martin Whitly (Sheen), was a notorious serial killer called “The Surgeon” who killed at least 23 people. Since murder is “the family business”, Malcolm uses his twisted genius for good, to help the NYPD solve crimes and stop killers. He works alongside his longtime mentor, Gil Arroyo (Phillips), and two detectives — no-nonsense Dani Powell (Perrineau) and JT Tarmel (Harts), a born-and-bred New Yorker who questions whether Bright is a psychopath himself. In season two, Malcolm must deal with the repercussions of the first season finale and his father seeks to deepen his relationship with his prodigal son.

Airing on Tuesday nights, the second season of Prodigal Son averages a 0.41 rating in the 18-49 demographic and 2.09 million viewers in the live+same day ratings. Compared to season one, that’s down by 45% in the demo and down by 38% in viewership. The ratings were reportedly a big factor in the cancellation.

It’s not known yet if the FOX show will be shopped to other outlets. The series is co-produced by Warner Bros. Television so HBO Max may be the most likely candidate.

Here are some thoughts from the cast and crew regarding the cancellation:

Wow. Gutted. Didn’t see that one coming. Might be taking a few days away from the platform #Prodigies. Just know that you have been the most wonderful, entertaining, brilliant fan base I have ever encountered. Much Love. #GilArroyo #ProdigalSon

Love you Dani. Thanks for the ride! Thanks to the crew, the cast , the fans, @FOXTV and @warnerbrostv for everything. Forever grateful for this experience pic.twitter.com/JIxzvC9iBf

#ProdigalSon From “Lil Edrisa” and me to all the #Prodigies out there. ❤️ pic.twitter.com/xLB5u6SXGY

What do you think? Will you miss the Prodigal Son TV show on FOX? Would you watch a third season if it landed on a streaming service? If so, which one?

Gil Arroyo is a great person.

Can’t believe it was cancelled! We loved it! Great plot, writers and acting! Esp beloved Michael Sheen who can do anything! Just saw he’s working on a 2nd season of GOOD OMENS!! Can’t wait! And we adore Tom Payne!! ♥️♥️Please bring back from cancellation!!!

This is awful. This show was interesting, creative, the characters were amazing. Everytime something good to watch is taken away. I hope it gets picked up.

Absolutely shocked! Our favorite show! We don’t watch Fox for anything else, so her goes! Please some other network please pick you up! We were not nearly done! We loved you all so!

Wow. Debis Rebel stumptown next all rise macguyver magnum pi and now prodigal son what are you guys thinking ? Screw the ratings. Your ratings are down only cause people have Hulu cause cable is too expensive we watch the next day. Why don’t you partner with Hulu instead of trying to revive a dying cable industry? You’d be surprised by the ratings of the shows you are now canceling lol you guys in charge are idiots and have no taste

Probably be replaced by some meaningless reality show. Why!?!

WHAT?!? What the hell Fox. You are becoming just like the other Primetime specially ABC cancels all the good show and keep all the crappy crap shows. Prodigal son is one of the best series that you have done; it’s very well written especially about the psyche and the psychology of a person’s mind and the Deep drama that keeps you wanting to watch the show and now you’re leaving us hanging on at the last episode to wait to see what’s going to happen or has happened. Please continue the show there is a lot more to be said… Read more »

Prodigal Son has so many more stories to tell. Best show Fox ever had! Please pick it up any network

Please don’t cancel Prodigal Son. Best show in a very long time. Actors are all the best of the best. If Fox can’t keep it send it to Amazon.

I am SPEECHLESS !Fox you really don’t know what a great series is! What I do know is; your network is no longer on any TV in my house!!!! I am apologizing to all the shows/series that I enjoyed on Fox network – – GOODBYE