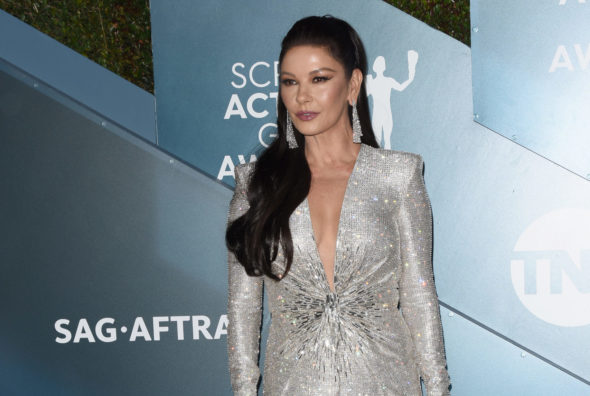 Prodigal Son is getting ready for its return to FOX, and a big name has been added to the cast for the second half of the upcoming second season. Catherine Zeta-Jones will come on-board as a series regular. She will play Claremont Psychiatric’s resident MD. Zeta-Jones is joining Michael Sheen and Thomas Payne on the thriller, which follows Malcolm Bright (Payne) as he works with the NYPD as a profiler.

FOX revealed more about the addition to the Prodigal Son cast in a press release.

“Academy Award, Tony Award and three-time Screen Actors Guild Award winner and Golden Globe nominee Catherine Zeta-Jones (Chicago, Ocean’s 12, Traffic, Feud) will join FOX’s hit drama, PRODIGAL SON, for Season Two of the series. Starring as a series regular opposite fellow Welsh actor Michael Sheen, Zeta-Jones will appear in the latter half of the season as DR. VIVIAN CAPSHAW, Claremont Psychiatric’s resident MD. In Season Two, DR. MARTIN WHITLY (Sheen) is assigned to infirmary duty, and Dr. Capshaw (Zeta-Jones) revels in tasking “The Surgeon” to clean bedpans and mop the floor. But as Martin proves valuable in treating patients, Capshaw begins to see him in a new light… which is not a good thing.

“An extraordinary talent, Catherine Zeta-Jones is the perfect foil for the brilliant Michael Sheen,” said Michael Thorn, President, Entertainment, FOX Entertainment. “I can’t wait to see these two greats go head-to-head in a season that is bound to raise the bar set by an outstanding Season One.”

PRODIGAL SON follows MALCOLM BRIGHT (Tom Payne), a criminal profiler with a rare talent for getting inside the minds of killers. He learned how they think because his father, Martin Whitly, was a notorious serial killer known as “The Surgeon.” Now he’s using his twisted genius to help the NYPD solve their most puzzling murders. Bright’s team, led by his longtime mentor, NYPD Lieutenant GIL ARROYO (Lou Diamond Phillips), includes Detectives DANI POWELL (Aurora Perrineau), JT TARMEL (Frank Harts) and medical examiner DR. EDRISA TANAKA (Keiko Agena). Season Two picks up with Bright’s personal life in disarray after the shocking actions of his sister, AINSLEY (Halston Sage), in the Season One finale. Now, he must “take care” of her and protect his mother, JESSICA WHITLY (Bellamy Young), from a secret that could tear the family apart all over again! Further complicating matters, Martin seeks to deepen his relationship with Bright, his prodigal son, but forging this bond leads to shocking twists and revelations. Season Two guest stars include Christian Borle and Michael Potts.”

What do you think? Are you a fan of the Prodigal Son TV Show on FOX? Are you excited to see Zeta-Jones on the series?

I think Fox should consider running the series in order after this season is completed; at least around this part of country ,only certain episodes have been shown more than once. As we all know, on demand service has been cut to get people to buy more streaming services….just a thought, I love this show

I LIVE FOR PRODIGAL SON! I have been a Tom Payne since his Jesus days on TWD! ❤️

I was really looking forward to the new season, but the arrival of Ms. Jones has me wondering. I’ll give it a try.

Can’t wait for season 2 . Looking forward to it coming back. A very entertaining show.