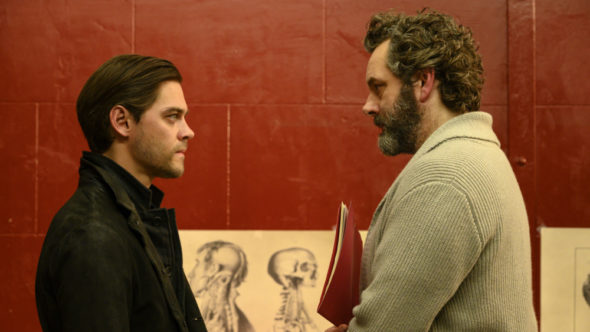 We learn many things from our parents and the same can be said for the lead character in FOX’s new Prodigal Son series. Airing on Monday nights this fall, the new drama follows an expert criminal psychologist who’s father was a notorious serial killer. He uses his skills to help the NYPD help solve crimes.

Here’s more information and a trailer from FOX:

PRODIGAL SON
From Emmy Award-nominated executive producers Greg Berlanti and Sarah Schechter (“Riverdale,” “The Flash”) and writers Chris Fedak (“Deception,” “Chuck”) and Sam Sklaver (“Deception,” “Bored to Death”), PRODIGAL SON is a fresh take on a crime franchise with a provocative and outrageous lead character and a darkly comedic tone. MALCOLM BRIGHT (Tom Payne, “The Walking Dead”) has a gift. He knows how killers think, how their minds work. Why?

Back in the 1990s, his father was one of the best, a notorious serial killer called “The Surgeon.” That’s why Bright is the best criminal psychologist around; murder is the family business. He will use his twisted genius to help the NYPD solve crimes and stop killers, all while dealing with a manipulative mother, annoyingly normal sister, a homicidal father still looking to bond with his prodigal son and his own constantly evolving neuroses.

Meet the happy family. DR. MARTIN WHITLY (Emmy Award and Golden Globe nominee Michael Sheen, “Masters of Sex,” “Frost/Nixon”) is intelligent, wealthy and charismatic, and also happens to be a predatory sociopath who killed at least 23 people. Bright’s mother, JESSICA WHITLY (Bellamy Young, “Scandal,” “Criminal Minds”), an elegant and WASPy New Yorker, wields sarcasm like a samurai sword and has an opinion on every aspect of Bright’s life. Perhaps Bright’s only ally is his sister, AINSLEY WHITLY (Halston Sage, THE ORVILLE), a TV journalist who wishes her brother would “take a break from murder” and have a normal life.

Unfortunately for his sister, the only way Bright feels normal is by solving cases with the help of his longtime mentor, NYPD Detective GIL ARROYO (Emmy Award and Golden Globe nominee Lou Diamond Phillips, “Longmire,” “Stand and Deliver”). Arroyo’s one of the best detectives around, and he expects no less from his team – Detective DANI POWELL (Aurora Perrineau, “The Carmichael Show,” “Jem and the Holograms”), a headstrong no-nonsense cop who quickly becomes impressed with Bright’s work; and Detective JT TARMEL (Frank Harts, “The Path,” “Billions”), a born-and-bred New Yorker who questions whether Bright is a psychopath himself. So much for normal.

What do you think? Do you like the sound of the Prodigal Son TV show? Do you plan to check out this new FOX series?

I’ve watched the entire first season. It’s the best I’ve seen in a few years. I’m not a serial killer sort of person so I was stunned when it kept me interested through the complete season. Pretty catchy for anyone interested in how the mind works not only of the killer but the way it effects the thinking of those who’s lives he touches.

Holy crap another TV series about ANOTHER serial killer. How effin original! Has no one in the TV movie business any imagination that it’s either doctors, lawyers, or cops chasing that damn nuisance, the local serial killer suddenly killing a dozen times a night! BORING!!

Looks a little scary but I will give it a try

Looks like a knock off of the French series The Mantis (La Mante) which is on Netflix.

That was my original reaction, as well. I looked it up, expecting to see just that! But, in every article about the series, they’re claiming it’s based on “HOUSE.” What?

I went to google after watching the first episode of Prodigal Son just to see if it was inspired by La Mante–so strange to me that they wouldn’t address the similarities.

That’s exactly what I thought as well! I thought more people would be talking about it, but I guess La Mante was not really that popular…

Err no comedy here so not sure why that was mentioned. It looks great.