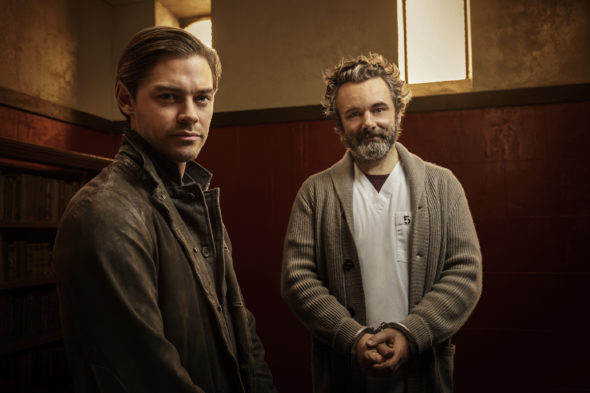 Can this new series pull in killer ratings? Has the Prodigal Son TV show been cancelled or renewed for a second season on FOX? The television vulture is watching for the latest cancellation and renewal news, so this page is the place to track the status of Prodigal Son, season two. Bookmark it, or subscribe for the latest updates. Remember, the television vulture is watching your shows. Are you?

Airing on the FOX television network, the Prodigal Son TV series stars Tom Payne, Michael Sheen, Bellamy Young, Lou Diamond Phillips, Aurora Perrineau, Frank Harts, Halston Sage, and Keiko Agena. Malcolm Bright (Payne) is an extraordinary criminal psychologist who knows how killers think and how their minds work. In the 1990s, his father, Dr. Martin Whitly (Sheen), was a notorious serial killer called “The Surgeon” who killed at least 23 people. Since murder is “the family business”, Malcolm uses his twisted genius for good, to help the NYPD solve crimes and stop killers. He works alongside his longtime mentor, Gil Arroyo (Phillips), and two detectives — no-nonsense Dani Powell (Perrineau) and JT Tarmel (Harts), a born-and-bred New Yorker who questions whether Bright is a psychopath himself.

The first season of Prodigal Son on FOX is averaging a 0.75 rating in the 18-49 demographic and 3.37 million viewers. Find out how Prodigal Son stacks up against the other FOX TV shows.

Will FOX cancel or renew Prodigal Son for season two? Right now, I think it will be renewed but that prediction could change if the ratings keep dropping. FOX has ordered a full season of 22 episodes so that’s a positive sign. I’ll keep an eye on the Nielsens and update this page with breaking developments. Subscribe for free Prodigal Son cancellation and renewal alerts.

5/21/20 update: Prodigal Son has been renewed for a second season on FOX.

What do you think? Are you glad that the Prodigal Son TV show has been renewed for a second season? How would you feel if FOX had cancelled this TV series, instead?

Best show ever! I hope it continues for years to come!

Please come on with season two already what a amazing show

Finally, a network bringing back an intelligent, funny, horrifying, interesting, well acted, TV show. The fact that I watch it on Hulu, is an indication that I have already made my transition to internet TV from Cable TV where I can pick the shows I want to watch without feeling like an old, useless person whose likes and dislikes no longer count on the moron networks. Prodigal son is one of the best shows I watched this past season that deserved to be renewed. Therefore, I was betting it would be cancelled. I’m still not sure I believe them. They… Read more »

Dude should of stayed on the walking dead

Pleas renew this show! It keeps you on the edge of your seat with a all the twists and turns! So captivating! 2021 is way too long to wait! The acting is brilliant!

Please please bring this captivating show back. The acting is excellent and every episode gets more and more suspenseful. Best show on network TV in a very long time.