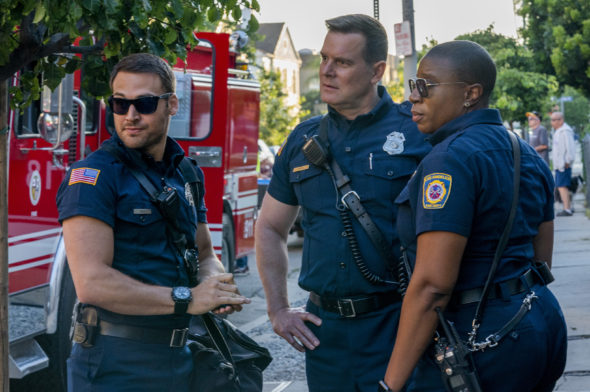 Is this drama a hit or a ratings disaster?. Has the 9-1-1 TV show been cancelled or renewed for a fourth season on FOX? The television vulture is watching for the latest cancellation and renewal news, so this page is the place to track the status of 9-1-1, season four. Bookmark it, or subscribe for the latest updates. Remember, the television vulture is watching your shows. Are you?

Airing on the FOX television network, 9-1-1 stars Angela Bassett, Peter Krause, Jennifer Love Hewitt, Oliver Stark, Kenneth Choi, Aisha Hinds, Rockmond Dunbar, Ryan Guzman, Corinne Massiah, and Marcanthonee Jon Reis. A scripted drama that’s been inspired by real-life experiences, this show centers on the police officers, firefighters, and paramedics who risk their lives to save others. No matter how frightening, dangerous, and shocking a situation may be, these first responders rush toward disasters while others are running for cover.

Will FOX cancel or renew 9-1-1 for season four? Unless the ratings completely collapse, I’m sure it will be renewed. I’ll keep an eye on the Nielsens and update this page with breaking developments. Subscribe for free 9-1-1 cancellation and renewal alerts.

What do you think? Are you glad the 9-1-1 TV show has been renewed for a fourth season? How would you feel if FOX had cancelled this TV series, instead?

love this show can not wait to see more

Please dont cancel this show. Every new episode puts me on the edge of my seat. I love all of them. I wanna know what’s going to happen next.

I just love the series , I go check regularly on hot star for the new episode but it’s stopped all of sudden
Please get it back

Love this TV Show! If I can’t watch an episode I always have it on record! ❤

I am glad 911 got renewed but when does it return

We never miss a show of either series, LA or San Antonio. The emergencies are often tense, but fun, but the real draw is the diverse and terrific cast. We are in love with each of them….so unique and such wonderful back stories. This has to be due to the talent and insight of Angela Bassett. We thank her and look forward to new seasons of each.

911 is the only drama both my husband and I equally love and never miss an episode. Otherwise we watch reruns of really old shows (Munsters, Matlock, Little House On The Prairie), renovation shows, animal shows, and anything with Liam Neeson! Most of television is must miss programming.

Love the show really miss the characters really want to know when comin back on!

I’ve been waiting for a show like this all my life the real deal thank you.

We love the show. Keeps us on the edge of our seats. Thank you for returning it.