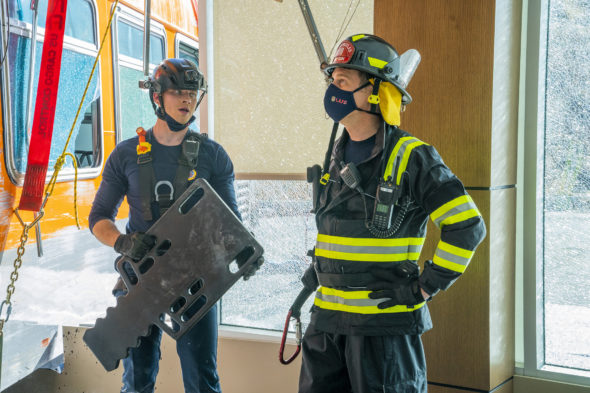 Are the events in this show scarier than the ones we have in the real world? Has the 9-1-1 TV show been cancelled or renewed for a fifth season on FOX? The television vulture is watching all the latest cancellation and renewal news, so this page is the place to track the status of 9-1-1, season five. Bookmark it, or subscribe for the latest updates. Remember, the television vulture is watching your shows. Are you?

Airing on the FOX television network, 9-1-1 stars Angela Bassett, Peter Krause, Jennifer Love Hewitt, Oliver Stark, Kenneth Choi, Aisha Hinds, Ryan Guzman, Rockmond Dunbar, Corinne Massiah, Marcanthonee Jon Reis, Gavin McHugh, and Jon Harlan Kim. A scripted drama that’s been inspired by real-life experiences, this show centers on the police officers, firefighters, and paramedics who risk their lives to save others in Los Angeles. The fourth season begins with Los Angeles’ finest and fearless first responders helping citizens after a devastating 8.0 earthquake and coastal tsunami wreak havoc in the city. Meanwhile, Athena (Bassett) is determined to put her physical and emotional injuries behind her, Maddie (Hewitt) and Chimney (Choi) prepare for the birth of their baby, Hen (Hinds) begins medical school, and Buck (Stark) delves into his past to help deal with his present.

Will FOX cancel or renew 9-1-1 for season five? This is one of the network’s highest-rated shows so I have no doubt that it will be renewed. I’ll update this page with breaking developments. Subscribe for free alerts on 9-1-1 cancellation or renewal news.

What do you think? Are you glad that the 9-1-1 TV show has been renewed for a fifth season? How would you feel if FOX had cancelled this TV series, instead?

Used to like Law and Order SUV. MY NEW GO TO IS 9-1-1 got excited when USA said new episodes but they are 2018. Thought familiar. Get it back on.

I have really enjoyed 911 series and hope it continues…

I just got into the show and I am in love with the show. I really hope they renew it for season 5, 6, 7, 8… etc, just like Greys Antonym. I also love the friendship between Buck and Eddie, great duo!!!

Hi
9-1-1 is one of the beautiful tv series as i ever seen.I locking forward to see new session of this amazing drama