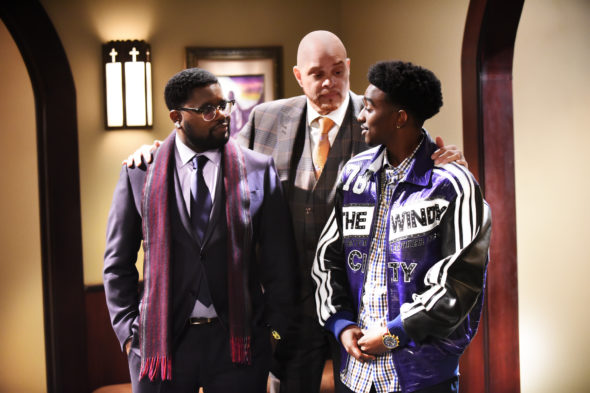 Has Rel made a strong new start in his life? Is the Rel TV show cancelled or renewed for a second season on FOX? The television vulture is watching for the latest cancellation and renewal news, so this page is the place to track the status of Rel, season two. Bookmark it, or subscribe for the latest updates. Remember, the television vulture is watching your shows. Are you?

A FOX multi-camera sitcom, Rel stars Lil Rel Howery, Jessica ‘Jess Hilarious’ Moore, Jordan L. Jones, and Sinbad. Set on the West Side of Chicago, and inspired by the comedy of Lil Rel Howery, the series centers on Rel (Howery) a hardworking, successful husband and father. He had everything, until his wife had an affair with his barber, then took the kids and decamped to Cleveland. Now, with the help of his Dad (Sinbad), brother Nat (Jones), and best friend, Brittany (Moore), Rel is trying to maintain a good relationship with his kids and find love again — and a new barber.

The first season of Rel on FOX averaged a 0.74 rating in the 18-49 demographic and 1.96 million viewers. Find out how Rel stacks up against the other FOX TV shows.

Will FOX cancel or renew Rel for season two? The ratings have sunk quite low so I don’t think this series will survive. I’ll update this page with breaking developments but I certainly wouldn’t expect a renewal. Subscribe for free Rel cancellation and renewal alerts.

What do you think? Did you hope the Rel TV show would be renewed for a second season? How would you feel now that FOX has cancelled this TV series, instead?

Please bring REL back, had a lot of potential to be a success. Great episodes such as guest stars legendary Leon,Earthquake, Tasha Smith, and Kyla Pratt, legendary Vernee Watson,and other notable stars. But REL ( including his characters), legendary Sinbad, and introducing new fresh actors such as Jordan, and Jess really make the show worth watching the way they help bring the content to life.:-)

Johnny A
Reply to  Mimi Rock

I think the show is boring, predictable and unfunny. If it isn’t cancelled, it should be moved to Friday night.