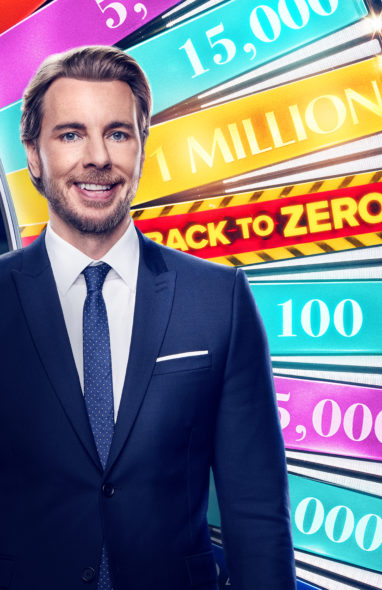 Do we have a winner? Has the Spin the Wheel TV show been cancelled or renewed for a second season on FOX? The television vulture is watching for the latest cancellation and renewal news, so this page is the place to track the status of Spin the Wheel, season two. Bookmark it, or subscribe for the latest updates. Remember, the television vulture is watching your shows. Are you?

A FOX high-stakes game show hosted by Dax Shepard, Spin the Wheel gives contestants the opportunity to win over $20 million per episode. To play, contestants answer pop culture trivia questions. With each correct answer, the players get to add another prize wedge to the wheel, but each incorrect answer brings with it a wedge that puts their winnings in jeopardy. As they progress, they must choose to either walk away with the prize money in their bank, or risk the entire thing to spin the wheel another time.

The first season of Spin the Wheel on FOX averaged a 0.54 rating in the 18-49 demographic and 2.41 million viewers. Find out how Spin the Wheel stacks up against the other FOX TV shows.

Will FOX cancel or renew Spin the Wheel for season two? The ratings aren’t great but it’s doing well compared to the rest of the network’s summer programming. I think it will be renewed. I’ll update this page with breaking developments. Subscribe for free Spin the Wheel cancellation and renewal alerts.

What do you think? Do you hope the Spin the Wheel TV show will be renewed for a second season? How would you feel if FOX cancelled this TV series, instead?

Great show. Miss it. Hope you bring it back.

Definitely hope that the show will be coming back on! Love it,

Really liked this show. Exciting and fun . Hope it returns.

This show SUCKS!!! Nobody ever wins with that format. You can predict EVERY week what happens. Same crap!! Stupid

This show SUCKED!!!! Nobody EVER WON! It was the same crap weekly

With tv becoming out of hand with all the cussing and such this is such a fun show to watch for adults and kids. Please keep it please!! Thank you we love it in Iowa!!

That show was incredible and my girlfriend and I will be very disappointed in FOX if they do not bring it back for Season 2.

It interesting I say keep it. Episode 8 is on right now it obvious she get over an million if the sister doesn’t baill.