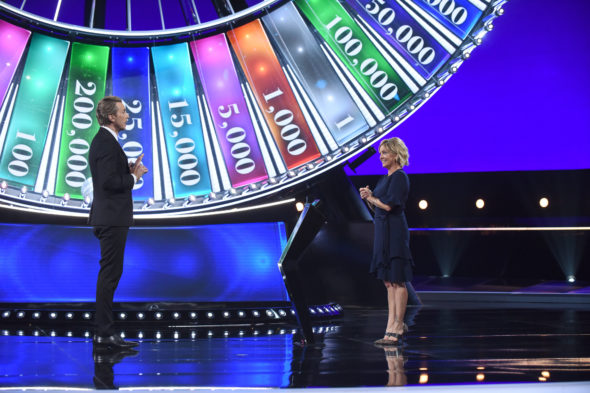 Is the first season of the Spin the Wheel TV show on FOX a big winner? As we all know, the Nielsen ratings typically play a big role in determining whether a TV show like Spin the Wheel is cancelled or renewed for season two. Unfortunately, most of us do not live in Nielsen households. Because many viewers feel frustration when their viewing habits and opinions aren’t considered, we’d like to offer you the chance to rate all of the Spin the Wheel season one episodes here.

A FOX high-stakes game show hosted by Dax Shepard, Spin the Wheel gives contestants the opportunity to win over $20 million per episode. To play, contestants answer pop culture trivia questions. With each correct answer, the players get to add another prize wedge to the wheel, but each incorrect answer brings with it a wedge that puts their winnings in jeopardy. As they progress, they must choose to either walk away with the prize money in their bank, or risk the entire thing to spin the wheel another time.

What do you think? Which season one episodes of the Spin the Wheel TV series do you rate as wonderful, terrible, or somewhere between? Should FOX cancel or renew Spin the Wheel for a second season? Don’t forget to vote, and share your thoughts, below.

I love this show, please renew

This show is soo rigged and if you cant see that then there’s something wrong with you . If you don’t believe me just watch the ball everytime as it lands on whatever amount it lands on . You’ll see what I’m talking about . It’s sooooo obvious ! I can’t believe they made another rigged show , it’s not right for us .. the people who watch it let alone the people who are paying to be on the show . Smh

I really like Spin the Wheel. It is entertaining and family friendly. A breath of fresh air for the seemingly endless parade of reality tv junk.

i like the show ” spin the wheel ” i’ve always watch it every thursday if I,m off at work ,or if I missed it i watched the reply , i make sure i watched all the episodes . i feel excited ,every time there,s a winning contestant . It seems like i can feel their emotions and joy of happiness . this show is good because it can change the life of any individual who wins and have their apportunity to be on the show like this ..and a person,s determination to really win ,so exciting . Thank you… Read more »

I personally hate this show! It so stressful for the participants. It is a take of The Wall. It was stressful you the participants as well. I have watched it because I like game but this way to hard to watch. Sorry but I probably won’t be watching it in future and up a game show that is a little more to participates and their goals and families. If you are not a completely heartless soul this is hard to watch.

First, I thought it took the concepts of The Wall, but it had promise for nice wins. By the second episode, I was convinced that they would not be giving away much and had no intentions to. At episode three when the first black contestant arrived (a US veteran) and they walked away with nothing, that really left a sour taste in my mouth. I will not be watching going forward, as I believe this game gives false hope and certainly will not give much, if at all to the non-majority. I thought Justin Timberlake would do better; then again… Read more »

I didn’t care for this show! Won’t be watching!