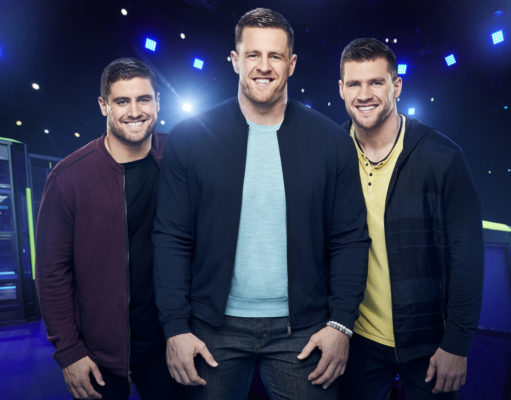 TV show description:
A physical competition series, the Ultimate Tag TV show is based on the classic playground game of chase. Co-host JJ Watt is one of the executive producers.

Everyday citizens compete in the game and must vault, dodge, tumble and dive over various epic, three-dimensional moving courses. Their one simple goal is to not get caught. As competitors progress, they are challenged to take on even more extreme courses and earn points for their performance in each game.

Chasing the contestants every step of the way are a variety of resident “professional” Taggers, larger-than-life characters who have a range of jaw-dropping athletic skills. These Taggers are intermittently released into the course, and only the contestants who can outlast them the longest will secure their place in the championship game and a chance at a big cash prize.

What do you think? Do you like the Ultimate Tag TV show? Do you think it should have been cancelled or renewed for a second season?

A copy of World Chase Tag turned into ridiculousness. No right to be on the air. Lame.

My young kiddos enjoy watching Ultimate Tag and I think the Watt brothers are doing a great job hosting. The only issues I have with the show is that it has two Taggers in the last competition to catch the one competitor. It doesn’t seem fair. I also wish the obstacle course would be different every week so it would be more interesting. My kids are glued to the TV watching the amazing athleticsm of the Runners and Taggers. Watching Ultimate Tag has motivated us to play tag around our home and has given us something fun to do during… Read more »

Ridiculous SHOW!!! My husband and I are just laughing at this point! Will not ever waste my time again!

this has to be ONE OF THE STUPIDEST,DUMBEST, USELESS shows yet, its time we as viewers stop watching these “reality”/game,”real house wives of…”competition, dating,singing etc. shows, they are all garbage,if people stopped watching , some of the shows people watched and were cancelled ,might be given more time/second chance, to find an audience. granted a lot of the cancelled shows didn’t deserve to get on the air, or even made, but some , like man with a plan, would still be on. lets make the networks, put shows on WORTHY of us watching, i mean “celebrity ” watch party? come… Read more »