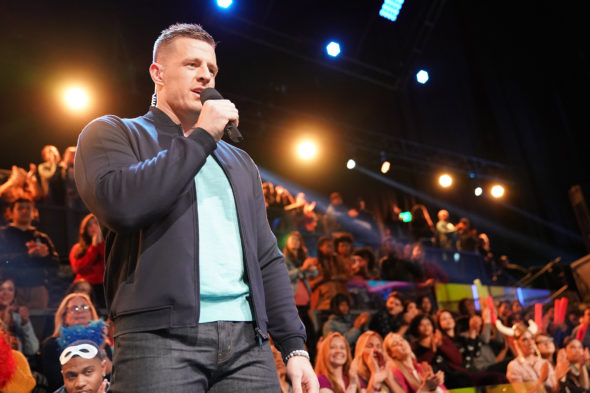 Will the first season of the Ultimate Tag TV show catch on with FOX viewers? As we all know, the Nielsen ratings typically play a big role in determining whether a TV show like Ultimate Tag is cancelled or renewed for season two. Unfortunately, most of us do not live in Nielsen households. Because many viewers feel frustration when their viewing habits and opinions aren’t considered, we invite you to rate all of the first season episodes of Ultimate Tag here.

A FOX physical competition series, the Ultimate Tag TV show is co-hosted by NFL siblings JJ Watt, TJ Watt, and Derek Watt. It’s based on the classic playground game of chase. Everyday citizens compete in the game and must vault, dodge, tumble and dive over various epic, three-dimensional moving courses. Their one simple goal is to not get caught. As competitors progress, they are challenged to take on even more extreme courses and earn points for their performance in each game. Chasing the contestants every step of the way are a variety of resident “professional” Taggers, larger-than-life characters who have a range of jaw-dropping athletic skills. These Taggers are intermittently released into the course, and only the contestants who can outlast them the longest will secure their place in the championship game and a chance at a big cash prize.

What do you think? Which season one episodes of the Ultimate Tag TV series do you rate as wonderful, terrible, or somewhere between? Do you think that Ultimate Tag should be cancelled or renewed for a second season on FOX? Don’t forget to vote, and share your thoughts, below.

I dont think Ultimate Tag is a bad game show however I don’t see it getting renewed because it’s the exact same & small course each week. I also don’t think they should replace the taggers during a specific competition. They (taggers) are refreshed and not as tired as the competitors so it isn’t an even playing field and seems unfair. I do enjoy watching the show even though I think it needs some tweaking. In my opinion the Watt brothers do a great job as hosts.

Not good…. Let’s play some tag.. over and over…

I think it be OFF THE AIR. Very childness