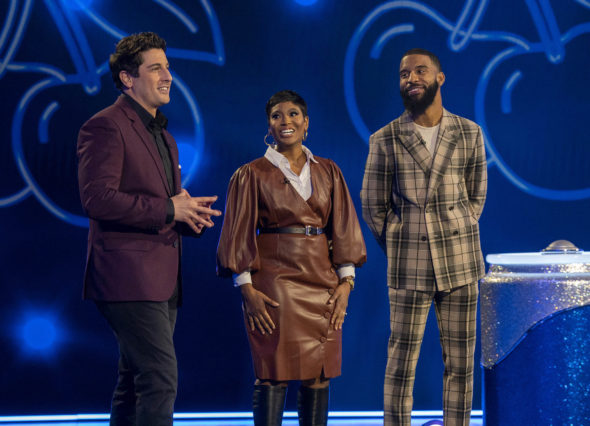 Will the first season of the Cherries Wild TV show be a big winner for FOX? As we all know, the Nielsen ratings typically play a big role in determining whether a TV show like Cherries Wild is cancelled or renewed for season two. Unfortunately, most of us do not live in Nielsen households. Because many viewers feel frustration when their viewing habits and opinions aren’t considered, we invite you to rate all of the first season episodes of Cherries Wild here.

A FOX trivia game show, the Cherries Wild TV series is hosted by Jason Biggs. The competition series features two rounds of pop culture trivia gameplay. In each episode, a team of two contestants try and “Solve the Slots” in hopes of getting one step closer to winning the jackpot. At the end of each episode, when they spin the reels on the enormous, three-story slot machine, contestants will attempt to capture all five Wild Cherries to win the ultimate cash prize — $250,000.

What do you think? Which season one episodes of the Cherries Wild TV series do you rate as wonderful, terrible, or somewhere between? Do you think that Cherries Wild should be cancelled or renewed for a second season on FOX? Don’t forget to vote, and share your thoughts, below.