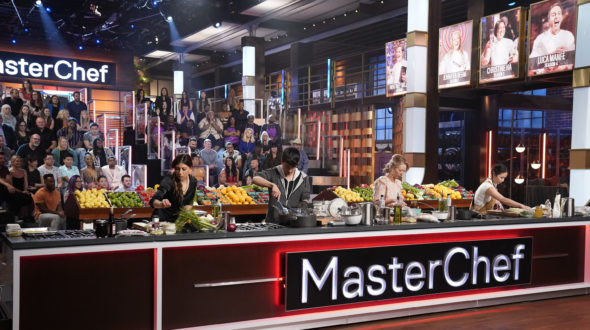 Could a former MasterChef Junior contestant win the 12th season of the MasterChef TV show on FOX? As we all know, the Nielsen ratings typically play a big role in determining whether a TV show like MasterChef is cancelled or renewed for season 13. Unfortunately, most of us do not live in Nielsen households. Because many viewers feel frustrated when their viewing habits and opinions aren’t considered, we invite you to rate all of the 12th season episodes of MasterChef here.

A FOX cooking competition series, the MasterChef TV show features award-winning Chef Gordon Ramsay, acclaimed chef Aarón Sánchez, and renowned restaurateur Joe Bastianich as judges. Season 12 brings together 20 memorable and talented all-star contestants — including two MasterChef Junior veterans now competing as adults. They all get a second chance to prove they have what it takes, facing the toughest challenges to date, all while being held to the highest standards in the series’ history. The contestants will face the challenge of feeding hungry members of the Coast Guard, demonstrate their skills in a vegan dish challenge, travel to Horsetown USA (Norco, CA) to feed cowboys, and compete in the fan-favorite restaurant takeover challenge at Wolfgang Puck’s “Spago.” Only one home cook will ultimately claim the MasterChef title, the $250,000 grand prize, and a complete state-of-the-art kitchen.

What do you think? Which season 12 episodes of the MasterChef TV series do you rate as wonderful, terrible, or somewhere between? Do you think that MasterChef should be cancelled or renewed for a 13th season on FOX? Don’t forget to vote, and share your thoughts, below.