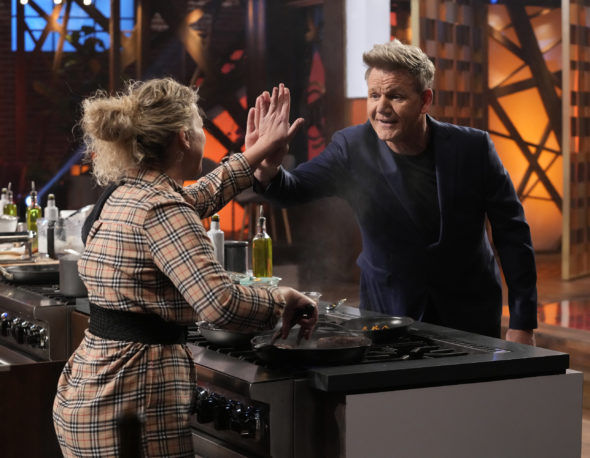 FOX is cooking up more competition. The network has renewed MasterChef for a 13th season. The 12th season finishes airing tonight.

A cooking competition series, the MasterChef TV show features award-winning Chef Gordon Ramsay, acclaimed chef Aarón Sánchez, and renowned restaurateur Joe Bastianich as judges. Season 12 brings together 20 memorable and talented all-star contestants — including two MasterChef Junior veterans now competing as adults. They all get a second chance to prove they have what it takes, facing the toughest challenges to date, all while being held to the highest standards in the series’ history. The contestants will face the challenge of feeding hungry members of the Coast Guard, demonstrate their skills in a vegan dish challenge, travel to Horsetown USA (Norco, CA) to feed cowboys, and compete in the fan-favorite restaurant takeover challenge at Wolfgang Puck’s “Spago.” Only one home cook will ultimately claim the MasterChef title, the $250,000 grand prize, and a complete state-of-the-art kitchen.

The 12th season of MasterChef averages a 0.41 rating in the 18-49 demographic and 2.20 million viewers. Compared to season 11, that’s down by 30% in the demo and down by 12% in viewership in the live+same day ratings (including DVR playback through 3:00 AM). While these numbers don’t include further delayed or streaming viewing, they are a very good indicator of how a show is performing, especially when compared to others on the same channel. It’s the network’s highest-rated series of the summer.

The Season 12 Finale of MASTERCHEF: BACK TO WIN Crowns a Winner Tonight, Wednesday, September 14, on FOX

In the Season 12 finale episode of MASTERCHEF: BACK TO WIN, airing tonight, Wednesday, Sept. 14 (8:00-9:02 PM ET/PT), former judge Christina Tosi of Milk Bar returns and a winner is crowned! The three remaining chefs rush against the clock to complete their final three entrees and whip up a gourmet dessert with the help of Tosi. Find out who will ultimately claim the MASTERCHEF title, the $250,000 grand prize and a complete state-of-the-art kitchen from VIKING.

MASTERCHEF is now casting for talented amateur cooks from all types of backgrounds and with a range of cooking styles. If you think you have what it takes to become the next MasterChef, visit www.masterchefcasting.com for eligibility rules and other terms and conditions. Must be 18 years old or older as of January 1, 2023.

MASTERCHEF is produced by Endemol Shine North America and One Potato Two Potato, and is based on a format created by Franc Roddam. Elisabeth Murdoch, Danny Schrader, Gordon Ramsay, Pat Llewellyn, Ben Adler, Sharon Levy and DJ Nurre serve as executive producers. Join the conversation on Facebook, Twitter and Instagram or by using #MasterChef.

What do you think? Have you enjoyed watching the MasterChef TV series on FOX? Are you glad that this series has been renewed for a 13th season?

Love this show and glad to see it has been renewed!