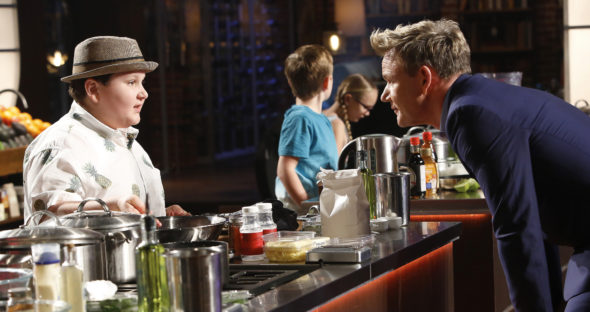 MasterChef Junior has some new company. FOX just confirmed the TV show has been renewed for an eighth season and Daphne Oz has joined as a new judge.

The new season of the competition series will see a group of talented, young chefs “showcase their culinary abilities and passion for food through a series of delicious challenges.” Judges include Gordon Ramsay and Aarón Sánchez.

FOX has not yet announced a premiere date for season eight of MasterChef Junior, but you can read more info below:

In the new season, the pint-sized contestants will cook a meal for diners at a historical renaissance fair and size up against monster trucks at a motocross track. The chef-testants also will welcome Gordon’s daughter, Tilly Ramsay, back to the MASTERCHEF kitchen for a donut contest! With challenge after exciting challenge, one talented kid will be named America’s newest MASTERCHEF JUNIOR, taking home the trophy and $100,000 grand prize.

Daphne Oz is an Emmy Award-winning television host, New York Times-bestselling author, chef and entrepreneur focused on innovation in food and beverage, beauty, wellness, fashion and media. She was previously co-host of “The Chew” for six seasons. Now, as one of the co-hosts of “The Dish on Oz” (a weekly series on “The Dr. Oz Show”), she brings the latest in food news, family-friendly recipes, expert tricks and social media-worthy indulgence to the small screen. She also co-hosts the chart-topping podcast “Mom Brain,” on which she shares candid conversations with trusted experts, doctors, celebrities and friends about parenting and how to raise happy, confident kids. Her delicious and refreshingly realistic approach to balanced living has made her an in-demand speaker on all things food, wellness, motherhood and lifestyle. A graduate of Princeton University, the Institute for Integrative Nutrition and the Natural Gourmet Institute, Oz and her husband have three children and are expecting their fourth.

MASTERCHEF JUNIOR is produced by Endemol Shine North America and One Potato Two Potato, and is based on a format created by Franc Roddam and Endemol Shine. Elisabeth Murdoch, Georgie Hurford-Jones, Gordon Ramsay, Natalka Znak, Danny Schrader, Patricia Llewellyn and Ben Adler serve as executive producers. “Like” MASTERCHEF JUNIOR on Facebook at facebook.com/MasterchefJuniorFOX/. Follow the series on Twitter @MasterChefJrFOX and join the discussion with #MasterChef. See photos and videos on Instagram @MasterChefJunior.

All-New Episodes of MASTERCHEF Now Air Twice Per Week, Wednesdays and Thursdays at 8/7c on FOX!”

What do you think? Do you watch MasterChef Junior? Are you glad it’s coming back?