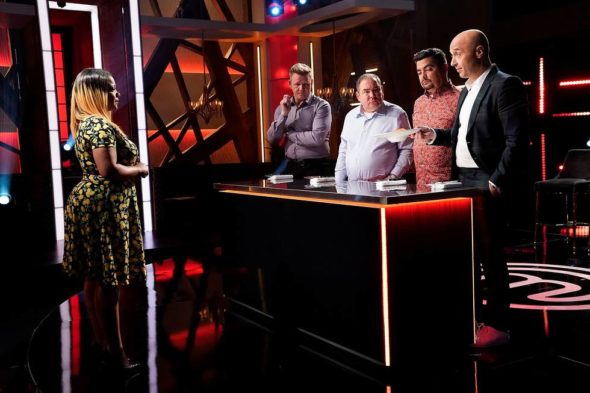 Can home chefs beat Gordon Ramsay at his own game in the 11th season of the MasterChef TV show on FOX? As we all know, the Nielsen ratings typically play a big role in determining whether a TV show like MasterChef is cancelled or renewed for season 12. Unfortunately, most of us do not live in Nielsen households. Because many viewers feel frustrated when their viewing habits and opinions aren’t considered, we invite you to rate all of the 11th season episodes of MasterChef here.  *Status Update Below.

A FOX cooking competition, MasterChef TV show features award-winning chef Gordon Ramsay, acclaimed chef Aarón Sánchez, and renowned restaurateur Joe Bastianich as they judge the work of culinary competitors alongside iconic kitchen legends like Emeril Lagasse, Paula Deen, Roy Choi, Nancy Silverton, and Morimoto. For the first time, only 15 of the best home cooks in America will receive the coveted white apron and impress four legends with all new challenges, including the toughest yet — a head-to-head battle with Ramsay. Only one home cook will ultimately claim the Masterchef title, the $250,000 grand prize, a complete Viking kitchen, and kitchen tools and bakeware products from OXO.

What do you think? Which season 11 episodes of the MasterChef TV series do you rate as wonderful, terrible, or somewhere between? Do you think that MasterChef should be cancelled or renewed for a 12th season on FOX? Don’t forget to vote, and share your thoughts, below.

Love Masterchef/Legends… I’ve actually loved all the Masterchef seasons. I make sure to DVR the episodes if I’m possibly going to miss one. I was very sad that a new episode did not air recently! Gordon come back!!!

Why are all the good shows being cancelled and all the **** shows like reality shows and zombie shows being renewed. Bring back all rise and rebel