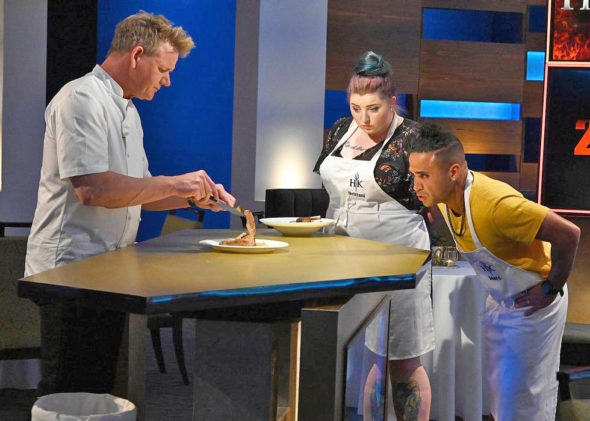 Who will be the top chef in the 19th season of the Hell’s Kitchen TV show on FOX? As we all know, the Nielsen ratings typically play a big role in determining whether a TV show like Hell’s Kitchen is cancelled or renewed for season 20. Unfortunately, most of us do not live in Nielsen households. Because many viewers feel frustration when their viewing habits and opinions aren’t considered, we invite you to rate all of the 19th season episodes of Hell’s Kitchen here.

A FOX reality TV series cooking competition, Hell’s Kitchen is hosted by Gordon Ramsay. The 19th season sees the series move to Caesars Palace Las Vegas for the first time (due to the pandemic). Chef Ramsay puts 16 aspiring chefs from around the country through their paces before a winner is named. At stake is a Head Chef position at the Gordon Ramsay Hell’s Kitchen Restaurant in Caesers Palace and a cash prize of $250,000.

What do you think? Which season 19 episodes of the Hell’s Kitchen TV series do you rate as wonderful, terrible, or somewhere between? Are you glad that Hell’s Kitchen has already been renewed for a 20th season on FOX? Don’t forget to vote, and share your thoughts, below.