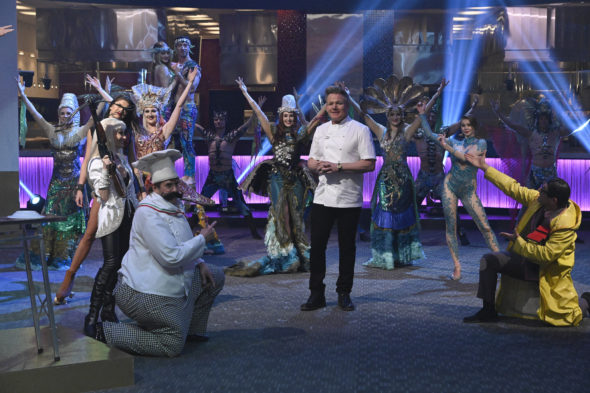 Will Chef Ramsay be any nicer in Vegas? Has the Hell’s Kitchen TV show been cancelled or renewed for a 20th season on FOX? The television vulture is watching all the latest cancellation and renewal news, so this page is the place to track the status of Hell’s Kitchen, season 20. Bookmark it, or subscribe for the latest updates. Remember, the television vulture is watching your shows. Are you?

Airing on the FOX television network, the Hell’s Kitchen TV show is hosted by Gordon Ramsay. The 19th season sees the cooking competition series move to Caesars Palace Las Vegas for the first time (due to the pandemic). Ramsay puts 16 aspiring chefs from around the country through their paces before a winner is named. At stake is a Head Chef position at the Gordon Ramsay Hell’s Kitchen Restaurant in Caesers Palace and a cash prize of $250,000.

The 19th season of Hell’s Kitchen averaged a 0.74 rating in the 18-49 demographic and 2.67 million viewers. Compared to season 18 (which aired two years ago), that’s down by 6% in the demo and down by 4% in viewership. Find out how Hell’s Kitchen stacks up against other FOX TV shows.

We don’t have to wonder if FOX will cancel or renew Hell’s Kitchen for season 20. The network has already renewed the series for a 20th anniversary season. I’ll update this page with breaking developments. Subscribe for free alerts on Hell’s Kitchen cancellation or renewal news.

What do you think? Do you hope the Hell’s Kitchen TV show will be renewed for a 20th season? How would you feel if FOX cancelled this TV series, instead?

Wow nikki vs. Amber for top 5. It was said nikki worked for Amber 14 months out of her two years. Before doing the show I want to see nikki beat amber as an student become the master dead.